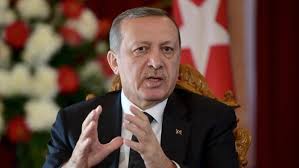 “Contacts between Latin America and Islam date back to the 12th century. Muslims discovered America in 1178, not Christopher Columbus,” the conservative president said in a televised speech during an Istanbul summit of Muslim leaders from Latin America.

“Muslim sailors arrived in America from 1178. Columbus mentioned the existence of a mosque on a hill on the Cuban coast,” Erdogan said.

Erdogan said that Ankara was even prepared to build a mosque at the site mentioned by the Genoese explorer.

“I would like to talk about it to my Cuban brothers. A mosque would go perfectly on the hill today,” the Turkish leader said.

History books say that Columbus set foot on the American continent in 1492 as he was seeking a new maritime route to India.

A tiny minority of Muslim scholars have recently suggested a prior Muslim presence in the Americas, although no pre-Columbian ruin of an Islamic structure has ever been found.

In a controversial article published in 1996, historian Youssef Mroueh refers to a diary entry from Columbus that mentions a mosque in Cuba. But the passage is widely understood to be a metaphorical reference to the shape of the landscape.