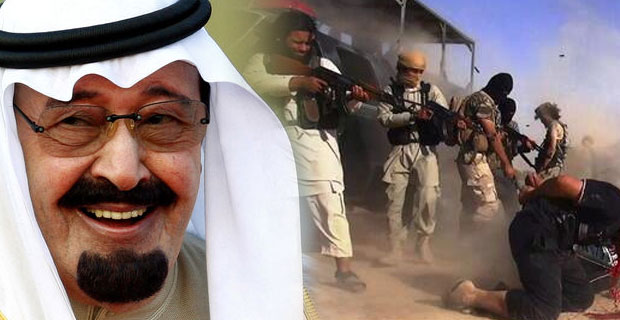 The leadership of Islamic State (IS) has no intention of standing still.

In a 17-minute audio message, purportedly from its elusive leader Abu Bakr al-Baghdadi, the group sets its sights firmly on Saudi Arabia, birthplace of Islam and the world’s largest oil producer and exporter.

The speaker does not refer to it as Saudi Arabia, since this is a name derived from the ruling tribe, the al-Saud, whose authority IS does not accept.

Instead he calls it “the land of Haramayn”, the land of the two holy places, meaning Mecca and Medina.

Reaching out to IS’s growing number of Saudi followers, he sets out a target list for attack, starting with the Shia who make up a minority of Saudi nationals, living mostly in the oil-rich Eastern Province, and whom hardline Salafi radicals view as heretics.

So deep are the sectarian divisions opened up in the Middle East by the insurgency in Iraq that many Saudis view IS not as a marauding band of terrorists but as brave defenders of Sunni Islam against the encroaching forces of Iran and its Shia allies.

Saudi officials have long been warning that their country is the primary target of IS.

Having declared itself a caliphate this summer, it was inevitable that sooner or later the group would turn its attention to the largest and most important country in the region.

Saudi Arabia’s supreme religious authority, the grand mufti, has branded IS as the “greatest enemy of Islam”.

A recent op-ed written in the New York Times by Saudis close to the government said: “Saudi Arabia is the only authority in the region with the power and legitimacy to bring IS down.”

Yet many blame the Saudi authorities for the rapid rise of IS, accusing them of funding and exporting an intolerant version of Islam that has become a stepping stone towards violent jihad.

The Saudi government emphatically rejects any blame for the growth of IS, pointing out that it is a function of the chaos engendered by the Syrian civil war and the discriminatory policies towards Iraqi Sunnis practiced by the Shia-led government in Baghdad.

The Saudis also point out that they fought and won a bitter three-year insurgency by al-Qaeda inside their country that cost hundreds of lives.

Today the Saudis find themselves in an extremely uncomfortable position.

Their air force has joined the US-led coalition in conducting numerous air strikes against IS positions in Syria, yet this is deeply unpopular with many Saudis.

A prince who has flown sorties against IS in an F15 jet has reportedly received death threats.

More than 2,000 Saudi nationals are estimated to have joined the ranks of IS, bringing with them an extreme brand of “takfiri” ideology that views large portions of the population with suspicion and intolerance.

Along with Qatar and Kuwait, the Saudi authorities are struggling to prevent donations from private individuals ending up with IS.

On top of this, security has deteriorated rapidly on the southern border with Yemen, where a number of Saudi extremists have joined al-Qaeda after being released from rehab programmes where they pledged to renounce violence.

Saudi Arabia is unlikely to face a direct military invasion by IS.

It has a well-marked and patrolled northern border with Iraq and a military equipped with billions of dollars’ worth of Western weapons.

Instead, it faces a growing threat of isolated violence within its borders, likely to manifest itself as occasional bombings, shootings and kidnappings that will test the resources of its domestic intelligence service.
BBC