As expected Lebanese Health Minister Wael Abu Faour revealed more horror stories Friday about food safety in Lebanon and said that he was “shocked” by the health and hygiene conditions at chicken farms and butcheries.

“Major butcheries were shut down and we’ll take measures against firms selling unhealthy water,” he stressed during a press conference.

The minister dismissed accusations that the samples taken by the ministry’s inspectors were not handled, stored and transferred in a proper manner.

“We only accept valid samples and we dismiss the invalid ones. Therefore all the results we announced were based on samples that met the proper conditions of warehousing and transportation,” Abu Faour said , noting that the specimens were transferred “in special refrigerators and the results of the tests were accurate.”

“We came here to respond through science and to put an end to ‘political and commercial prostitution’,” said Abu Faour , in response to those who criticized him after he raised the alarm over food safety in the country.

Actions taken
Abu Faour said on Friday that he referred the food safety scandal to the public prosecutor and asked the interior minister to shut down three violating firms in Beirut and its southern suburbs.

The minister ordered “taking all measures necessary to forbid the sale of meat – kafta, minced meat, soujouk and basterma – at the al-Natour Butchery in Ras Beirut, and to seize the manufacturing, mincing and mixing machines,” National News Agency reported.

According to NNA report the al-Natour’s meat products contained “harmful bacteria ” and the hygiene conditions at the butchery are “disastrous.”

In October 2013, two owners of the al-Natour food company were sentenced to three years in prison on charges of processing and selling spoiled meat and other foodstuffs.

In March 2012, the Ministry of Economy’s Consumer Protection Directorate raided a warehouse owned by al-Natour brothers in the Sabra area in Tariq al-Jedideh, where 25 tons of expired meat were confiscated.

Abu Faour also ordered a 5-day closure of the Malak al-Batata Restaurant in Beirut’s Hamra Street after the health ministry’s inspectors determined that the fast food place did not meet “some of the health conditions related to food safety and general hygiene.”

Turning to Beirut’s southern suburbs, the minister asked the interior ministry to “dispose off all products at the Abboud Chicken store in the Sfeir area and to close the shop until new samples are examined, since the analyzed samples did not meet the proper health conditions.”

Abu Faour told reporters that he will continue to pursue the food safety law until the parliament endorses it, adding that Speaker Nabih Berri gave him positive signs in this regard. He also stressed that the ministry’s inspectors will continue their tours of restaurants and shops and go after violators. 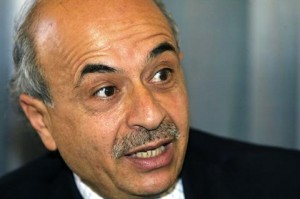 “We announce that the Indian Mirha Exports Pvt. Ltd has been blacklisted and removed from the list of companies that are allowed to export to Lebanon after we rejected three consecutive meat shipments,” Chehayeb , who like Abu Faour represent the Progressive Socialist party( PSP) in the cabinet said in a statement released by his press office.

He revealed that the meat shipments were contaminated with Salmonella.

Chehayeb denied a report by national committee to fight corruption which alleged that the ministry was bribed to allow the import of recent Brazilain meat shipment. He stressed that the ministry tried to contact the committee but could not find any contact details . He dismissed the the report as a fabrication.

PSP is headed by MP Walid Jumblatt who pledged his support to both ministers and urged them to pursue the scandal till the end .

Editor’s Report : Ya Libnan could not also find the contact details of the “national committee to fight corruption”, even though the formation of such a committee in Lebanon was recommended in 2008 by The Lebanese Transparency Association and United Nations Convention Against Corruption.