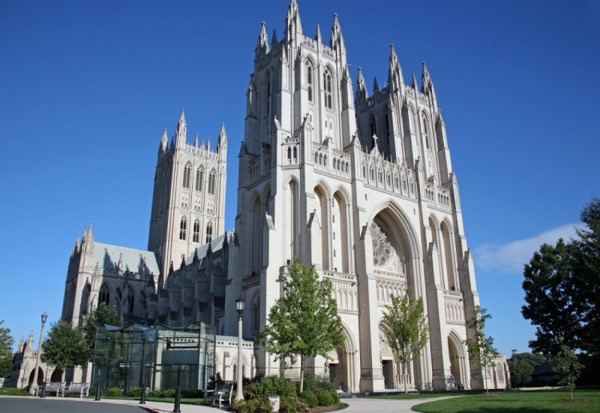 By Pamela Constable
In a corner of Washington National Cathedral, several hundred Muslim worshipers and other invited guests gathered Friday afternoon for a first-ever recitation of weekly Muslim prayers at the iconic Christian church and to hear leaders of both faiths call for religious unity in the face of extremist violence and hate.

The Arabic call to prayer echoed among the vaulted stone arches and faded away, followed by an impassioned sermon from Ebrahim Rasool, a Muslim scholar who is South Africa’s ambassador to the United States. Rasool called on Muslims, Christians and others to come together and make “common cause” in the fight against extremists who appropriate Islam.

“We come to this cathedral with sensitivity and humility but keenly aware that it is not a time for platitudes, because mischief is threatening the world,” Rasool said. “The challenge for us today is to reconstitute a middle ground of good people . . . whose very existence threatens extremism.”

The event was closed to the public and there was heavy security, with police checking every name and bag. Organizers from several area Muslim institutions said there had been concerns about security and threats after the event was publicized and that they and cathedral officials wanted to limit it to a small and selected group.

Nevertheless, the carefully scripted ceremony was marred once when a well-dressed middle-age woman in the audience suddenly rose and began shouting that “America was founded on Christian principles. . . . Leave our church alone!” She was swiftly ushered out by security aides, and the service continued.

Numerous speakers, including cathedral officials and local Muslim leaders, echoed Rasool’s message about the urgent need for religious understanding and collaboration. Most made pointed references to the symbolism of the majestic Christian building, where rugs had been laid for prayer.

The Very Rev. Gary Hall, dean of the cathedral, spoke of Saint Benedict, whom he said believed equally in the importance of prayer and hospitality. Marveling at the sounds of Arabic prayers, which he called “a beautiful sacred language in a beautiful sacred space,” Hall said he hoped the service would serve as the start of more efforts to work together for good.

Other speakers said they hoped the service would help correct some Americans’ misperceptions of Muslims as extremists and re-enforce tolerance among faiths.
“Salaam, shalom, peace. You are all so very welcome here,” said the Rev. Canon Gina Gilland Campbell, the cathedral’s director of liturgy, in an open greeting.

After the hour-long ceremony, which was covered live by several Arabic-language television channels, soft drinks and sweets were served to the guests, a mixture of people chosen to represent local mosques, churches and synagogues. Many seemed touched by the service, and several said they hoped the message would reach Muslims and others in the war-torn Middle East.

“I was very moved,” said Arif Ali, a lawyer in the District who brought his 12-year-old son, Zayd. “Ir really makes one think about the common heritage and values in Christianity and Islam.”

Rashid Makhdoom, a retired engineer from Potomac, said he believes that the message and symbolism of the event will “reverberate throughout the world. It should be a lesson for Muslims everywhere that we and Christians are all one,” he said.

The service developed out of a relationship between Campbell and Rasool, who worked together on a memorial service for Nelson Mandela. The intent was to make a statement about religious tolerance that would resound around the world.
It was not without critics, however.

In a Facebook post Thursday, the Rev. Franklin Graham, who heads the Billy Graham Evangelistic Association, said that it was “sad to see a church open its doors to worship of anything other than the One True God of the Bible . . .” As of late Friday, 64,000 people had “liked” the post.