Lebanon is the only country that defeated Islamic State, declared Czech FM 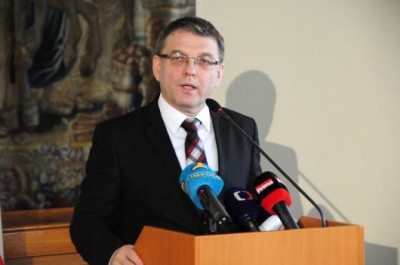 Czech Foreign Minister Lubomir Zaoralek praised on Wednesday The Lebanese army and declared that Lebanon is the only country that was able to defeat the Islamic State.

He was referring to the battles in Arsal in eastern Lebanon and in the northern capital Tripoli.

Zaoralek who arrived in Beirut on Wednesday on a two-day visit to discuss bilateral ties and ways to bolster them made the statement following talks with Foreign Minister Gebran Bassil.

Commenting on his talks with Bassil he said:
” We discussed bilateral cooperation between our two countries and I informed him that the Czech Republic is ready to develop trade and economic cooperation . We hope that during the month of January of next year, Lebanese businessmen will visit the Czech capital of Prague in order to search for different areas of common interests, because my government is interested in the reforms carried out by the Lebanese government in various fields. ”

He added: “The Czech Republic is an industrial nation and is ready to work on the development of joint cooperation with Lebanon on the level of economic exchange. Also, my country is ready to support Lebanon in the military field to confront terrorism, and support for military equipment and military cooperation with the Lebanese security forces. ”

He also said that his country is interested in providing humanitarian aid to Lebanon to deal with the displaced Syrians.

National News Agency said Zaoralek and an accompanying delegation headed from Beirut’s airport to Speaker Nabih Berri’s residence in Ain al-Tineh but ded not elaborate on the discussions.

Bassil confirmed that the discussions covered a “broad range of issues from bilateral ties to partnership between Lebanon and the European Union.”

“We covered the Czech Republic’s contributions in support of the efforts provided by Lebanon to tackle the adverse impact of the Syrian crisis,” Bassil wrote in a tweet.

Zaoralek is set to meet later in the day with Lebanese Prime Minister Tammam Salam at the Serail palace.