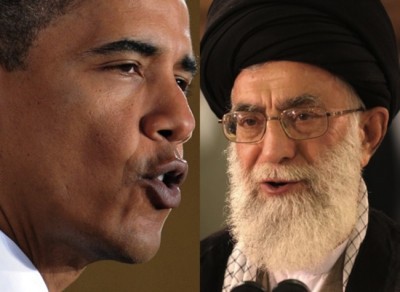 By:  Jackson DiehlAs a presidential candidate seven years ago, Barack Obama shook up the foreign policy world by declaring that he favored “direct diplomacy” to reshape U.S. relations with long-standing adversaries like Syria, Cuba and North Korea. Critics, including Hillary Clinton, called him naive, and until now they have proved right. Yet as he heads into the last stretch of his presidency, Obama is doubling down on a bet that in one last case — Iran — his strategy will yield a spectacular payoff.

The news that Obama dispatched yet another letter to Iranian supreme leader Ayatollah Ali Khamenei broke last week as U.S. negotiators worked feverishly to complete a deal on Iran’s nuclear program by a Nov. 24 deadline. A pact that restrains — but does not eliminate — Tehran’s ability to produce a weapon for a decade or so — but not indefinitely — is the administration’s current, discounted goal. Increasingly, however, senior administration officials talk about the nuclear diplomacy in the context of a larger effort to stabilize the shattered Middle East with Iran’s cooperation.
U.S. and Iranian forces are already working in tacit alliance in Iraq against the Islamic State, a point Obama apparently made to Khamenei. As they look beyond a potential nuclear deal, the president’s aides are suggesting that Iran could also support a new attempt to reach a political settlement in Syria — one that would leave at least part of the current, Iranian-backed regime in place.
It’s worth taking a step back to consider how far Obama is diverging from past U.S. policy in the Middle East. Since Jimmy Carter, presidents have sought to fashion an Arab coalition to contain the Islamic regime in Iran and thwart its aim to establish itself as a regional hegemon. The long and determined Iranian effort to acquire nuclear weapons has been central to its ambition. Obama’s final push, if it works, would allow Iran to keep much of its nuclear infrastructure while ceding Tehran a role in the pacification and political reconstruction of the lands from Baghdad to Beirut.

Of course, the pitch to Iran — like previous, more tactical U.S. attempts at detente dating to the Reagan administration — may fall flat. As Obama put it last week, “whether they can manage to say yes to what would clearly be better for Iran . . . is an open question.” It’s quite possible the talks will end with an agreement on extension of the current, interim deal, which would make it harder for the two governments to collaborate on Iraq or Syria.
That still leaves the question of whether Obama’s approach makes sense for the United States and its traditional allies in the Middle East. The Israeli government of Benjamin Netanyahu certainly doesn’t think so, nor do most leaders of the Persian Gulf states. They continue to view Iran as an existential threat, best treated with crippling economic sanctions, proxy war against its allies in Syria and Lebanon and, if necessary, direct military action against its nuclear installations. A bipartisan majority of the U.S. Congress agrees with them.

Obama appears increasingly disdainful of that approach. He is dismissive of the hawkish Netanyahu. He has often spoken of transcending the Middle East’s Shiite-Sunni divide and of not “embroiling ourselves in someone else’s civil war.” In other words, the United States should not be driven by the anti-Iranian passions of Sunni states such as Saudi Arabia and Turkey.

Detente with Iran is one reason Obama still refuses to extend U.S. military strikes in Syria to the regime of Bashar al-Assad, even though it is assaulting the moderate rebels the United States is counting on to fight the Islamic State. Attacking Assad, the reasoning goes, might cause Iran to use its Shiite militias in Iraq to retaliate against U.S. forces there. Better to try enlisting Iran in an effort to forge a political settlement that removes Assad. Such a compromise would probably mean allowing Assad’s Alawite sect — a Shiite offshoot and Iran’s ally — to remain in power; the hope is that Sunni states will swallow that solution as preferable to another failed Arab state.

In essence, the United States faces a choice in the Middle East of trying to defend its interests and restore stability with or against Iran. A policy of marginalizing Tehran — in keeping with that of the past three decades — would mean seeking the defeat of Assad’s army, pressuring Iraq’s government to curb Iran’s proxy Shiite militias and stepping up sanctions until Iran agrees to dismantle — not just temporarily limit — its nuclear infrastructure.
Obama’s bet is that the course of “direct diplomacy” is more likely to produce an acceptable outcome. His assumption is that there is a formula for an Iranian nuclear program and governments in Syria and Iraq that both Khamenei and U.S. allies can live with. Most likely he is wrong. But the audacity of his policy reflects a president bidding for vindication — and a legacy.