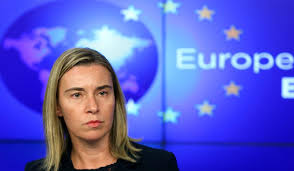 THE top EU diplomat appealed last night for the establishment of a Palestinian state as the killing of a young Arab-Israeli by police fanned tensions following violent clashes in Jerusalem.

“We need a Palestinian state — that is the ultimate goal and this is the position of all the European Union,” Ms Mogherini said during a trip to Gaza, devastated by its third conflict in six years.

Hamas and Israel fought a 50-day war in July and August which resulted in the deaths of 2140 Palestinians and more than 70 Israelis.

Palestinians are seeking to achieve statehood in Gaza and the Israeli-occupied West Bank with east Jerusalem as the capital.

Palestinian President Mahmud Abbas said yesterday that a draft resolution was on course to be submitted to the UN Security Council this month calling for an end date for Israeli occupation.

The text is expected to be vetoed by permanent member the United States.

Ms Mogherini’s visit came against a backdrop of surging Israeli-Palestinian tensions in annexed east Jerusalem where there have been near-daily clashes in flashpoint neighbourhoods.

In the village of Kfar Kana in northern Israel, meanwhile, a 22-year-old was shot dead by security forces after intervening in the dawn arrest of one of his relatives, brandishing a knife, according to police.

Dozens of angry youths later erected barricades and set fire to tyres on the outskirts of the village as police deployed reinforcements.

Arab Israelis, who account for about 20 per cent of Israel’s population, are the descendants of Palestinian Arabs who remained on their land when the Jewish state was established in 1948.

The shooting followed another night of clashes in east Jerusalem pitting youths throwing stones and firecrackers against police who used rubber bullets, stun grenades and teargas.

The violence was particularly intense at the Shuafat refugee camp, a maze of alleys crammed with Palestinian homes along the separation barrier cutting off east Jerusalem from the occupied West Bank.

The spike in violence came after one of the camp’s residents ploughed a car into pedestrians in Jerusalem on Wednesday, killing a policeman and injuring nine other people before he was shot dead.

On Friday local time, a young Israeli also died of injuries sustained in the attack — the second of its kind in a fortnight.

The anger has been fuelled by Israel’s settlement activities as well as efforts by far-right Jewish fringe groups to secure prayer rights at the Al-Aqsa compound which is holy to Jews as well as Muslims.

Speaking on Friday during her first official visit to Jerusalem, Ms Mogherini said there was a real “urgency” to pick up and advance the moribund peace process.

She also flagged up Israel’s settlement building on lands the Palestinians want for a future state as an “obstacle” to a negotiated peace.

“I reject the fictitious claim that the root of the continuous conflict is this or that settlement,” he said.

“Jerusalem is our capital and as such is not a settlement.”

Mr Netanyahu ordered the security forces to either seal or demolish the homes of any Palestinian involved in anti-Israeli attacks, an official said on Friday.

Ms Mogherini had been scheduled to meet Palestinian Prime Minister Rami Hamdallah in Gaza but he cancelled his trip after a series of bombs there Friday hit the homes and cars of Fatah officials.

Fatah, the party of Mr Abbas, laid the blame on the Islamist movement Hamas, the de facto rulers in Gaza, as a new row broke out between the rival Palestinian factions.

Hamas announced on Friday it was forming a thousands-strong “popular army” in the devastated Gaza Strip in response to what it called “serious Israeli violations” at Al-Aqsa.