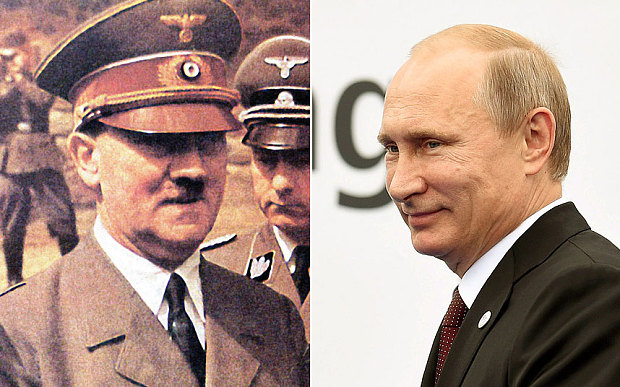 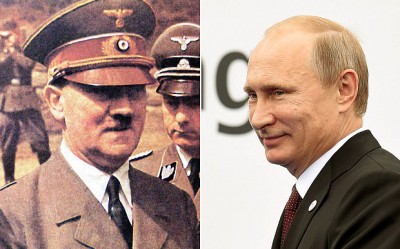 Vladimir Putin has said there was nothing bad about the Nazi-Soviet Pact, the non-aggression treaty which led to the carve-up of Poland at the outset of the Second World War, stating Britain and France destroyed any chance for an anti-fascist front with Munich Agreement.

The Russian president made the comments at a meeting with young historians in Moscow, during which he urged them to examine the lead-up to the war, among other subjects.

The comments are likely to cause dismay in eastern Europe, amid wider debate in Russia about growing attempts to use history as a means of shoring up Mr Putin’s rule.

Mr Putin said that Western historians today try to “hush up” the 1938 Munich Agreement, in which France and Britain – led by Neville Chamberlain, the prime minister – appeased Adolf Hitler by acquiescing to his occupation of Czechoslovakia’s Sudetenland.

“Chamberlain came, waved a piece of paper and said, ‘I’ve brought you peace’ when he returned to London after the talks,” Mr Putin, who is a keen amateur historian, said on Wednesday, according to a Kremlin transcript.

“To which Churchill, I think, said somewhere to a small group of people, ‘That’s it, now war is inevitable’. Because compromise with an aggressor in the form of Hitlerite Germany was clearly leading to a large-scale future military conflict, and some people understood that.”

Mr Putin appeared to think Moscow’s own agreement with Hitler – the 1939 Nazi-Soviet or Molotov-Ribbentrop Pact – was fine, however.

Secret protocols of the pact in which the Nazis and the Communists agreed to divide up Finland, Estonia, Lithuania, Latvia, Romania and Poland into spheres of influence were officially denied by the Kremlin until 1989.

More than 20,000 arrested and captured Poles were executed by the Soviet secret police in the Katyn massacre in 1940. The Nazis began an extermination campaign that would eventually lead to the deaths of three million Jews in Poland alone.

Mr Putin appeared to infer the secret protocols continued to be a matter of dispute today, saying, “people still argue about the Molotov-Ribbentrop Pact and accuse the Soviet Union of dividing up Poland”.

In 2009, the Russian leader condemned the Nazi-Soviet pact as “immoral” but said France and the UK had destroyed any chance for an anti-fascist front with the Munich Agreement.

Critics say Mr Putin and his administration are increasing mobilising historical events as a means of bolstering his authoritarian rule.

On Tuesday, which was the National Unity public holiday, the Russian leader visited a new multimedia exhibition in Moscow dedicated to the medieval Rurik dynasty.

The exhibition was at pains to draw parallels between the country’s turbulent past and its current confrontation with the West over the Ukraine crisis.

A section on Ivan the Terrible and the 16th century Livonian War described “the West’s first anti-Russian information campaign”.

“The Europeans tried to portray Russia as a country of cruel and aggressive barbarians,” said state television. “In the end, not strong enough to influence our independent international policies, they were obliged to introduce a raft of economic sanctions against us, as they would be called now.”