Hezbollah denies linking the fighting in Syria to Mahdi prophecies 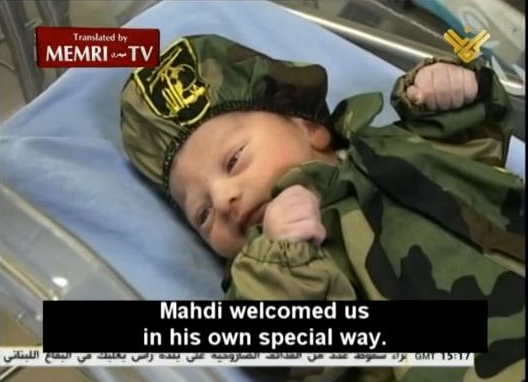 Hezbollah Secretary General Hassan Nasrallah on Sunday denied that his party’s military intervention in Syria is linked in any way to the prophecies about the return of Imam Mahdi.

“We are fighting in Syria to prevent American, Zionist and takfiri hegemony,” Nasrallah said a televised speech marking the eighth night of Ashura.

In is speech Nasrallah focused on the issue of Imam Mahdi.

The Mahdi is the prophesied redeemer of Islam who will rule for seven, nine, or nineteen years (according to differing interpretations) before the Day of Judgment (yawm al-qiyamah ) and will rid the world of evil.

There is no explicit reference to the Mahdi in the Qu’ran, but references to him are found in hadith (the reports and traditions of Muhammad’s teachings collected after his death).

For most Shiite Muslims, the Mahdi was born but disappeared and will remain hidden from humanity until he reappears to bring justice to the world, a doctrine known as the Occultation. For Twelver Shiite, this “hidden Imam” is Muhammad al-Mahdi, the Twelfth Imam. For the Sunnis, the Mahdi is Muhammad’s successor who is yet to come.

“We do not need a religious justification to fight in Syria and we’re not fighting to implement the signs which narrations say would pave the ground for the emergence” of Imam Mahdi, Nasrallah said .

“We are rather fighting to defend Lebanon and the region and to prevent a repetition of what (Islamic State chief) Abu Bakr al-Baghdadi did against the Iraqi Albu Nimr tribe,” added Nasrallah, referring to the massacre by the IS extremist group in Iraq’s Anbar province.

Nasrallah warned that “linking everything that is happening to the ‘signs of emergence o the Mahdi ‘ has dangerous cultural and ideological repercussions, which can only lead to aberration.”

Interest in the prophecies about the return of Imam Mahdi increased among the ranks of some Shiites and Hezbollah supporters after the group sent tens of thousands of fighters into neighboring Syria to fight alongside the supporters Syrian president Bashar al Assad against the mostly Sunni rebels .