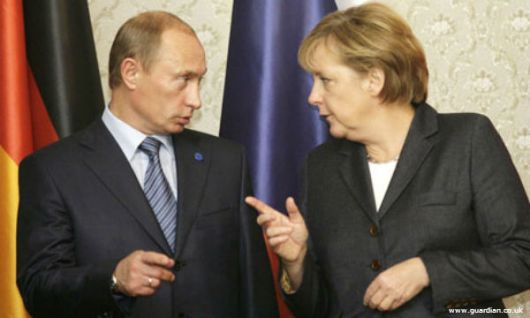 German Chancellor Angela Merkel told Russian President Vladimir Putin on the phone that Sunday’s planned elections in eastern Ukraine were illegitimate and would not be recognized by European leaders, a Berlin government spokesman said on Friday.

He said in the call there were diverging opinions on Sunday’s “so-called elections” in the self-proclaimed people’s republics of Donetsk and Luhansk.

“Merkel and Hollande underlined that there can only be a ballot in line with Ukrainian law,” he said, adding that the vote would violate the Minsk agreement and further complicate efforts to find a solution to the crisis in eastern Ukraine.

“The German government will not recognize these illegitimate elections”, Merkel’s spokesman said, adding that European leaders were united on this issue and had agreed on this at a summit last week in Brussels.

However, all four leaders welcomed the latest agreement between Russia and Ukraine on gas supplies, the spokesman said. Everybody agreed that both sides should put an end to violence in eastern Ukraine and implement the agreed, but fragile ceasefire.

Over 3,700 people have been killed in fighting in eastern Ukraine, where pro-Moscow rebels seek union with Russia. A ceasefire has been in force since September but there have been isolated flareups of fighting.