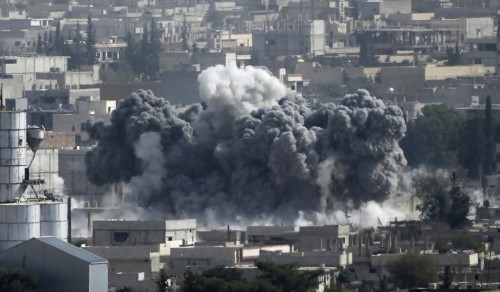 The United States has stepped up airstrikes against Islamic State fighters massed around the embattled Syrian town.
Share:
Ten Iraqi Kurdish fighters crossed into the embattled Syrian border town of Kobane from Turkey on Thursday, drawing an angry response from the Damascus government, which accused Ankara of violating national sovereignty by allowing foreign troops to enter Syria.

The Iraqi peshmerga delegation crossed back into Turkey at nightfall after discussing with Syrian Kurds details of the expected deployment of a force of about 150 that was dispatched from Iraq to help them battle Islamic State militants for control of Kobane, Kurdish activists said.

The obscure little town has no strategic significance but has emerged as an early test of the U.S.-led air campaign against the Islamic State in Syria. As the battles in Kobane raged within sight of TV cameras on the Turkish border and Syrian Kurds complained of being ignored, the town became the chief focus of the airstrikes.

U.S. warplanes have since conducted multiple bombing raids against Islamic State positions in and around Kobane, helping the Kurds stave off what had appeared to be imminent defeat.

The small peshmerga deployment is unlikely to herald a major shift on the ground, but it is a symbolically important moment for Kurds across the region, signifying an internationally sanctioned cross-border alliance that some of them hope will advance their dreams of uniting under an independent nation.

“The peshmerga won’t change the military balance,” said Kurdish activist Barzan Iso, speaking from the Turkish border. “But it shows that Kurds are not alone, and that we are united in the fight against terrorism and the Islamic State.”

The peshmerga presence also may make it easier for the United States toairdrop weapons to the beleaguered Kurds in Kobane, as it did last week, despite objections from Turkey. It also is expected to ease Turkey’s concerns about U.S. efforts to aid the Syrian Kurds because Ankara has good relations with Iraq’s Kurds and has welcomed the arrival of the peshmerga.

Although the peshmerga numbers are small, this is the first time foreign troops will be deployed publicly to Syria since the rebellion against President Bashar al-Assad began in 2011. Syria expressed fury and accused Turkey of violating its border “by allowing foreign forces and terrorist elements . . . to cross into Syrian territories.”

By “terrorist elements,” Syria was apparently referring to a contingent of about 50 Free Syrian Army opposition fighters who crossed into Kobane on Wednesday ahead of the peshmerga. The reinforcements were part of a wider, four-way deal reached among Turkey, the government of the Iraqi region of Kurdistan, the Syrian Kurds and the United States to reinforce the Kobane defenders.

Syria, however, singled out Turkey for responsibility, calling its behavior “disgraceful.”

“Once again, Turkey proves real its conspiratorial role, premeditated intentions and flagrant intervention in Syria’s affairs,” the Foreign Ministry said in a statement that was carried by the official Syrian Arab News Agency.

The statement also warned that Syria will seek to “thwart the dangerous plot of the Turkish government.” Syria issues almost-daily statements attacking Turkey, which backs the revolt against Assad.

The Syrian response underscored the complications involved in the effort to save Kobane.

The People’s Democratic Party, or PYD, to which the Kurds fighting in Kobane belong, is affiliated with the Kurdistan Workers’ Party, or PKK, which Turkey and the United States have designated a terrorist organization. The PKK, in turn, has ties to the Assad regime.

The Iraqi Kurds have close relationships with Turkey and the United States and are affiliated with a different Syrian Kurdish faction, the Kurdish National Council, which backs the Syrian opposition and is at odds with the PYD over who should control the Kurdish regions of Syria.

The deployment of the Iraqi peshmerga fighters in Kobane may, therefore, herald a breakthrough in the long-running rift between the rival Syrian factions and open the door to a more unified Kurdish position on the Syrian conflict that sits easier with the Turkish government.

Turkey had been loath to aid a faction it regards as close to Assad and is hoping the reinforcements will bring Syria’s Kurds closer to the opposition. The government in Ankara had been widely accused of not doing more to aid the Kurds as the Islamic State bore down on Kobane. Turkey, however, says the PYD faction in the town rejected offers of help.