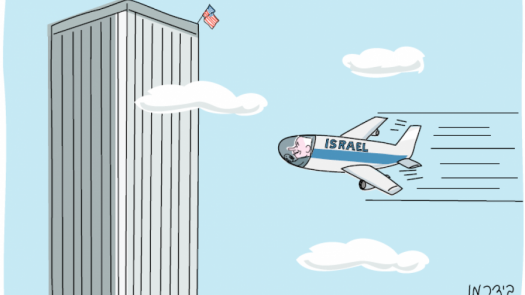 In the wake of a report that an Obama administration official used a barnyard epithet defying Hebrew translation to refer to Prime Minister Benjamin Netanyahu, the Israeli newspaper Haaretz published a cartoon on the strained relations between Washington and Jerusalem that compared the Israeli leader to the hijackers who attacked the United States on Sept. 11, 2001.

As the image circulated online, readers across the political spectrum in Israel and the United States expressed outrage at the depiction of a smiling Mr. Netanyahu piloting a plane at the World Trade Center. Others, including the Jerusalem-based political analyst Brooklyn Middleton, were left scratching their heads.

The cartoonist who created the image, Amos Biderman, explained on Twitter and in an interview with The Times of Israel that he meant to suggest that Mr. Netanyahu’s “arrogance” and policies on settlement construction in the West Bank had provoked “a disaster in Israel-U.S. relations on the scale of 9/11.”

A conservative Israeli magazine responded by remixing the image to portray Haaretz, the voice of liberal Zionism, on a similar suicide mission against the prime minister’s office.

One of Mr. Netanyahu’s American critics, M.J. Rosenberg, reminded his readers that when asked on Sept. 11, 2001, “what the attack meant for relations between the United States and Israel,” Mr. Netanyahu initially replied: “It’s very good.” Moments later, he retracted that statement, saying, “Well, not very good, but it will generate immediate sympathy.”

Whatever the cartoonist’s intention, the image was, as the British commentator Tom Wislon predicted, welcomed on social networks by anti-Semitic conspiracy theorists who continue to claim, in the complete absence of evidence, that the 2001 attacks were the work of Israeli intelligence operatives.

Mr. Netanyahu was dealing with a more important matter on Thursday, the violence in Jerusalem that set the city on edge, but before the cartoon was published, he did respond to the reported insult that prompted the image. The prime minister characterized the rhetorical attack on him by an unnamed American official as a response to his defense of Israel’s national security.