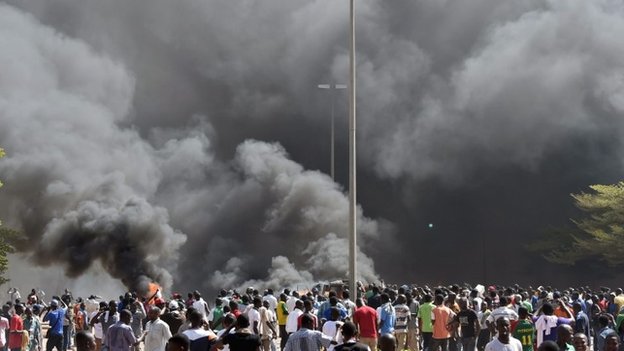 Burkina Faso’s President Blaise Compaore says he will stay in power for a year under a transitional government, following a day of violent protests demanding his resignation.

Earlier, demonstrators angered by his bid to extend his 27-year rule torched parliament and government buildings.

Mr Compaore said he would hand over power once the transitional government had completed its 12-month term.

He also said he was lifting a “state of siege” he had declared earlier.

In the previous announcement, Mr Compaore called for the military to implement emergency measures.

This was followed by a press conference where army chief General Honore Traore announced that a “transitional body [would] be put in place in consultation with all parties”.

“A return to the constitutional order is expected in no more than 12 months,” he said.

Generla Traore has not spelt out who would lead the interim administration.

He also declared the imposition of an overnight curfew, as well as the dissolution of parliament.

In a message broadcast by a local TV station after the general’s statement, Mr Compaore said he welcomed the military’s “patriotic action”.

He said he would hand over power to a democratically elected government after the transitional administration had completed its term.

He added that he was withdrawing a controversial law that would enable him to seek another term in office.

His plan to seek re-election triggered demonstrations in the capital, Ouagadougou. The protests are the most serious yet against Mr Compaore’s rule.

The main opposition leader, Zephirin Diabre, had told a local radio station the state of emergency was unacceptable. 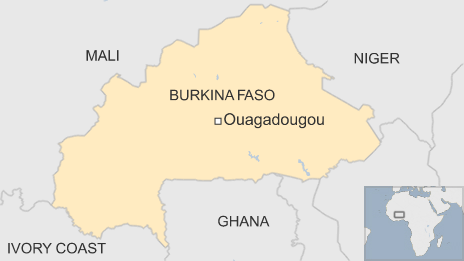 “We are calling on the people to show that they are against it,” he was quoted as saying. “The resignation of President Blaise Compaore is the only thing that can bring peace to the country.”

At least one person has been killed in the protests, says BBC Afrique’s Yacouba Ouedraogo in the capital.

Mr Diabre said dozens of protesters had been killed across the country by the security forces in a “barbaric escalation of violence”.

The military fired live bullets to try to disperse protesters who had occupied parliament, our correspondent says.

Protesters demanded his installation as president, our reporter says.

The city hall, the homes of MPs, and an upmarket hotel in Ouagadougou were also set ablaze.

Similar protests hit the south-western city of Bobo Dioulasso, and other towns in the poor West African state.

State television went off air after protesters ransacked its headquarters.

Mr Compaore first took power in a coup in 1987, and has won four disputed elections since then.

The protests forced the government to suspend Thursday’s parliamentary vote on a constitutional amendment that would have lifted the limit on presidential terms so that Mr Compaore could run for office again in 2015.

Mr Compaore is a staunch ally of the US and France, which uses Burkina Faso as a base for military operations against militant Islamists in the Sahel region.