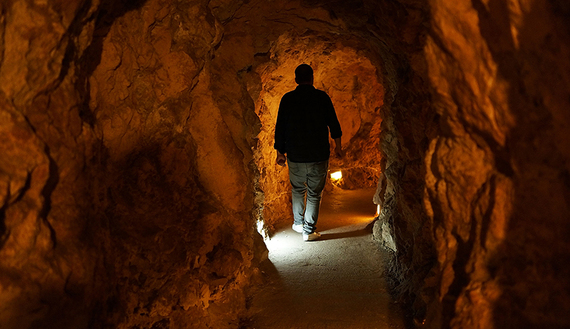 A man in Mleeta , south Lebanon walks in a tunnel in an underground bunker at the Resistance Museum, a showcase built by Hezbollah, Nov. 14, 2013. (photo by Spencer Platt/Getty Images)
Share:
Israel believes the militant group Hezbollah has probably dug tunnels across the border from Lebanon in preparation for any future war although it has no conclusive evidence, an Israeli army general said on Wednesday.

Israel’s vulnerability to tunnels was laid bare during its war against Hamas in Gaza in July and August. What began as shelling exchanges with Hamas escalated into a ground offensive after Palestinian militants used dozens of secret passages dug from Gaza into Israel to launch surprise attacks.

Residents of northern Israel, who were battered by Hezbollah rockets during a month-long war in 2006, have at times reported underground noises suggesting that guerrillas were burrowing across the frontier in a new tactic. The Israeli military says searches it has carried out have turned up nothing.

“We have no positive information meaning that there are tunnels. The situation is not similar to what there was around the Gaza Strip,” Major-General Yair Golan, commander of Israeli forces on the Lebanese and Syrian fronts, told Army Radio.

Hezbollah does not comment on its military capabilities. Spurred by the Gaza experience, the Israelis say they hope to develop effective tunnel-hunting technologies within two years.

Golan said Hezbollah, which is fighting on the side of President Bashar al-Assad in the civil war in Syria, appeared unlikely to seek a renewed conflict with Israel.

Were that to happen, he said, Israel would hit Lebanese targets hard but would also suffer from a Hezbollah rocket arsenal believed to be 10 times more potent than Hamas’s.

There have been occasional attacks along the border in recent weeks, however, including a roadside bomb planted by Hezbollah that wounded an Israeli soldier. Israel responded by firing artillery shells into southern Lebanon.

“We will not be able to provide the umbrella that was provided in the south by Iron Dome,” Golan said, referring to an aerial interceptor system which Israeli and U.S. officials say scored a 90 percent shoot-down rate against Gazan rockets.

“We and Hezbollah are conducting a kind of mutual-deterrence balance,” he said, while cautioning that isolated flare-ups on the border could still boil over into war.

“There is no absolute deterrence. Each side has its pain threshold, its restraint threshold, which when passed prompt it to take action.”