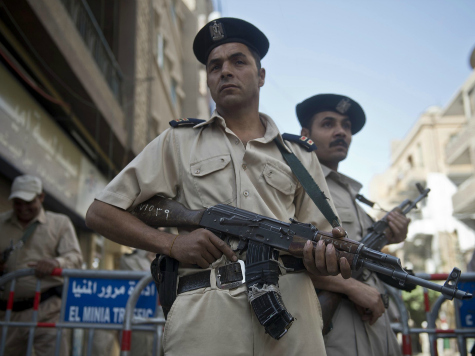 Egypt has declared a state of emergency in the north and centre of the Sinai Peninsula after a suicide car bombing killed 30 soldiers and wounded dozens.

The measures were due to begin on Saturday “for a duration of three months”, the presidency said in a statement issued in the wake of the deadliest attack on the security forces since the army deposed Islamist president Mohammed Mursi last year.

The decision was also taken to close the Rafah crossing into the Gaza Strip.

“The army and the police will take all necessary measures to tackle the dangers of terrorism and its financing, to preserve the security of the region … and protect the lives of citizens,” the presidential decree said.

The decision to invoke a state of emergency came after 30 soldiers were killed and dozens of others wounded in the attack in an agricultural area north-west of El-Arish, the main town in north Sinai.

The bombing was carried out by a suspected jihadist who rammed the checkpoint with a vehicle packed with explosives, security officials said.

Since Dr Mursi’s ouster, more than 1400 of his supporters have been killed in a crackdown by the authorities.

More than 15,000 others have been jailed including Dr Mursi and the top leadership of his Muslim Brotherhood, and more than 200 sentenced to death in speedy trials.