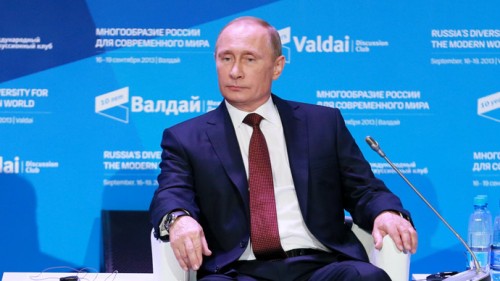 Russia intends to continue moves to a floating exchange rate and will not “burn” through its foreign exchange reserves, President Vladimir Putin said on Friday.

“We will gradually move to a floating exchange rate. We will not burn our reserves thoughtlessly. We will use them for a certain balancing,” Putin told a meeting with Russian and foreign experts on Russia.

Putin also said that Russia will put the main emphasis on attracting private investment into its economy.

Cold war tactics
In another development , Putin accused the United States on Friday of making the world a more dangerous place by imposing a “unilateral diktat” in international diplomacy and denied Russia wanted to build a new empire.

In a speech laced with language reminiscent of the Cold War, Putin shifted blame for the crisis in Ukraine to the West and portrayed Russia as a strong power that would not be forced to beg the West to lift sanctions imposed over the conflict.

“Statements that Russia is trying to reinstate some sort of empire, that it is encroaching on the sovereignty of its neighbors, are groundless,” Putin told a group of political scholars known as the Valdai Club in a resort above the Black Sea city of Sochi, which hosted the Winter Olympics this year.

“Statements that Russia is trying to reinstate some sort of empire, that it is encroaching on the sovereignty of its neighbors, are groundless,” the former KGB spy declared in a speech delivered standing at a podium, without a smile, in a ski resort in mountains above the Black Sea city of Sochi.

Listing a series of conflicts in which he faulted U.S. actions, including Libya, Syria and Iraq, Putin asked whether Washington’s policies had strengthened peace and democracy.

“No,” he declared. “The unilateral diktat and the imposing of schemes (on others) have exactly the opposite effect.”

Putin, 62, has stepped up anti-Western rhetoric since returning to the Kremlin as president in 2012, helping push up his popularity ratings since the annexation of Crimea from Ukraine in March.

Even so, the speech was one of the most hostile Putin has delivered against the West and it appeared partly intended to show Russian voters he will stand up to the rest of the world and defend their interests.

The criticisms of a world order dominated by Washington, more than two decades after the Cold War, recalled a 2007 speech in Munich in which Putin shocked the West by lambasting Washington’s “unipolar” world view. The speech prompted many Western leaders to reassess their view of Putin.

The annual meetings of what is known as the Valdai Club have rarely featured such open, direct and tough language in their debates on Russian policy.

Critics say the meetings have become a showcase for Kremlin policy, with the session attended by Putin shown live on state television and little discussion of Russia’s record on human rights and democracy, which is criticised in the West.

Putin rejected criticism over the Ukraine crisis, in which Moscow has sided with pro-Russian separatists in eastern Ukraine, and threw the West’s criticisms of Moscow back in its face.

Repeating accusations that Western governments helped pro-Western groups stage a coup d’etat that ousted a pro-Moscow president in Kiev in February, Putin said: “No one wanted to listen to us and no one wanted to talk to us.”

“Instead of a difficult but, I underline, civilised dialogue they brought about a state coup. They pushed the country into chaos, economic and social collapse, and civil war with huge losses,” he said.

Dismissing U.S. and European Union sanctions imposed on Moscow as a mistake, he said: “Russia will not be posturing, get offended, ask someone for anything. Russia is self-sufficient.”

He made only passing references to the decline of Russia’s $2 trillion economy, which is in danger of sliding into recession as its currency tumbles along with the price of oil, its main export item.

But he said in a question and answer session after his speech that Russia would not burn though its gold and foreign currency reserves thoughtlessly to prop up the economy.

Putin has increasingly sought to shift blame for the economic crisis onto global problems, the sanctions and the oil price. He and other Russian officials, including Foreign Minister Sergei Lavrov, have also used increasingly tough language to blame the West for the Ukraine crisis.

A ceasefire has been in force in Ukraine since Sept. 5, but it has been violated daily and the West says Moscow continues to have troops and weapons in east Ukraine. Russia denies this.