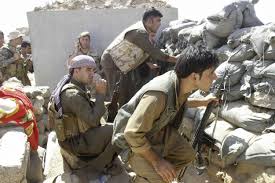 Turkey said on Monday it would allow Iraqi Kurdish fighters to reinforce fellow Kurds in the Syrian border town of Kobani, while the United States air-dropped arms for the first time to help the defenders resist an Islamic State assault.

Washington said the arms had been supplied by Iraqi Kurdish authorities and had been dropped near Kobani, which came under Islamic State attack in September and is now besieged to the east, west and south, and bordered to the north by Turkey.

Turkey has stationed tanks on hills overlooking Kobani but has refused to help the Kurdish militias on the ground without striking a broader deal with its NATO allies on intervening in the Syrian civil war, saying action should also be taken against Syrian President Bashar al-Assad.

However, Foreign Minister Mevlut Cavusoglu told a news conference that Turkey was facilitating the passage of Iraqi Kurdish peshmerga forces which have also fought Islamic State when the militants attacked the Kurds’ autonomous region inIraq over the summer. He gave no details.

Turkey’s refusal to intervene in the battle against Islamic State, which has seized large areas of Syria and neighboring Iraq, has led to growing frustration in the United States.

The policy has also provoked lethal riots in southeastern Turkey by Kurds furious at Ankara’s refusal to help Kobani or at least open a land corridor for volunteer fighters and reinforcements to go there.

Ankara views the Syrian Kurds with deep suspicion because of their ties to the PKK, a group that waged a decades-long militant campaign for Kurdish rights in Turkey.

Earlier the U.S. Central Command said it had delivered weapons, ammunition and medical supplies to allow the Kurdish fighters to keep up their resistance in the town which is called Kobani in Kurdish and Ayn al-Arab in Arabic.

The main Syrian Kurdish armed group, the YPG, said it had received “a large quantity” of ammunition and weapons.

Redur Xelil, a spokesman for the YPG, said the weapons dropped overnight would have a “positive impact” on the battle and the morale of fighters who have been out-gunned by Islamic State. But he added: “Certainly it will not be enough to decide the battle.”

“We do not think the battle of Kobani will end that quickly. The forces of (Islamic State) are still heavily present and determined to occupy Kobani. In addition, there is resolve (from the YPG) to repel this attack,” he told Reuters in an interview conducted via Skype.

He declined to give more details on the shipment.

The United States began carrying out air strikes against Islamic State targets in Iraq in August and about a month later started bombing the militant group in neighboring Syria.

However, the resupply of Kurdish fighters marks an escalation in the U.S. effort to help local forces beat back the radical Sunni militant group in Syria. It points to the growing coordination between the U.S. military and a Syrian Kurdish group that had been kept at arms’ length by the West due partly to the concerns of NATO member Turkey.

Washington has pressed Ankara to let it use bases in Turkey to stage the air strikes, and a Turkish foreign ministry official said the country’s airspace had not been used during the drops on Kobani.

U.S. President Barack Obama gave advance notice to his Turkish counterpart Tayyip Erdogan of its plans to deliver arms to the Syrian Kurds, a group Turkey views with distrust because of its links to Turkish Kurds who have fought an insurgency in which 40,000 people were killed.

“President Obama spoke to Erdogan yesterday and was able to notify him of our intent to do this and the importance that we put on it,” one senior U.S. official told reporters.

U.S. officials, speaking in a conference call, described the weapons delivered as “small arms” but gave no details.

Escalated U.S. air strikes on Islamic State in and around Kobani have helped to slow its progress there in the last week. The Kurds say the U.S. military has been coordinating the air strikes with them, helping to make them more effective.

The Syrian Observatory for Human Rights, which tracks the war in Syria using sources on the ground, said there had been two new air strikes on Islamic State positions after midnight.

In a brief statement, the U.S. Central Command said U.S. Air Force C-130 aircraft “delivered weapons, ammunition and medical supplies that were provided by Kurdish authorities in Iraq and intended to enable continued resistance against ISIL’s attempts to overtake Kobani,” using an acronym to refer to Islamic State.

The Central Command said 135 U.S. air strikes near Kobani in recent days, combined with continued resistance against Islamic State on the ground, had slowed the group’s advances into the town and killed hundreds of its fighters.

“However, the security situation in Kobani remains fragile as ISIL continues to threaten the city and Kurdish forces continue to resist,” the statement said.

“We understand the longstanding Turkish concern with the range of groups, including Kurdish groups, that they have been engaged in conflict with,” he added. “However, our very strong belief is that both the United States and Turkey face a common enemy in ISIL and that we need to act on an urgent basis.”

The Turkish presidency said Obama and Erdogan had discussed Syria, including measures that could be taken to stop Islamic State’s advances, and Kobani.

In a statement published on Sunday, it also said Turkish assistance to over 1.5 million Syrians, including around 180,000 from Kobani, was noted in the conversation.

In comments published by Turkish media on Monday, Erdogan equated the main Syrian Kurdish political group, the PYD, with the PKK, describing both as terrorist organizations.

“It will be very wrong for America with whom we are allied and who we are together with in NATO to expect us to say ‘yes’ (to supporting the PYD) after openly announcing such support for a terrorist organization,” Erdogan said.

Kobani is one of three areas near the border with Turkey where Syrian Kurds have established their own government since the country descended into civil war in 2011.