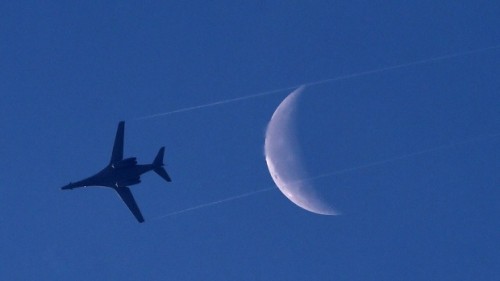 US Air Force B1-B bomber
Share:
The advance of Islamic State forces on the Syrian city of Kobani has stalled, with the militants forced to retreat on several fronts, shifting the month-long battle in favour of the Kurdish fighters defending the city.

The Kurdish fighters, Gen Austin added, had done “yeoman’s work in terms of standing their ground.”

However US Central Command said there was no evidence to back up the report, which journalists were unable to verify.

Over the past two days, the rapidly changing fortunes of the Kurdish fighters have produced a sense of palpable relief in Kobani, as well as in the refugee camps in neighbouring Turkey that are filled with the city’s residents.

The fierce clashes of previous weeks have given way to a tentative calm, broken Friday only by the occasional crash of mortar rounds and some scattered sniper fire.

A commander for the YPG, the Syrian Kurdish militia defending Kobane, who would only gave her code name Dicle, said Islamic State’s attacks on the area were aimed at severing the town’s last link with Turkey.

“They want to cut off Kobani’s connection with the rest of the world,” she told Reuters by telephone. “Turkey is not allowing in fighters or weapons, but they send aid at Mursitpinar. The Islamic State wants to destroy this gate so that we will be completely trapped here.”

Despite its proximity to the fighting, Turkey has refused to help arm the Kurdish fighters, who complain they are at huge disadvantage in the face of Islamic State’s weaponry, much of it seized from the Iraqi military when it took the city of Mosul in June.

Turkey views the YPG with suspicion for its long-standing links with the Kurdistan Workers Party (PKK), which has waged a 30-year armed campaign for self-rule in Turkey.

The spectators who have gathered daily on the Turkish hills overlooking Kobane turned their gaze away from the city on Friday to a village several miles west, where a group of Islamic State fighters had taken up positions after pulling back.

“I hear there is movement,” said Idris Bakr, a 26-year-old refugee who has been living, along with 35 members of his family, in a garage in the Turkish border town of Suruc for about a month. “God willing, it will be OK,” he said. “Days, we hope.”

Despite the rapid gains, Gen Austin warned that it was “highly possible that Kobane could still fall.”

With the militants still resisting in pockets of eastern Kobane, including on a strategically important hill, and with clashes possibly looming in the surrounding villages, the Kurdish fighters were not declaring victory.

The siege of Kobane, a majority-Kurdish area, has been freighted with symbolic, if not strategic, significance. It has become perhaps the most visible front of the war between the US-led coalition and the Islamic State, also known as ISIS or ISIL, as well as a crucible of broader tensions between Kurds and the Turkish government.

Both the United States and the militants have come to regard the city as a critical test of wills in the broader conflict in Iraq and Syria. Hundreds of Islamic State fighters had poured into the city, leading to predictions of its imminent fall as recently as last week.

“The enemy has made a decision to make Kobane his main effort,” Gen Austin.

The United States responded by sharply escalating the bombing campaign in conjunction with Kurdish fighters, who supplied targeting coordinates.

Although US officials denied that the situation in Kobane was a factor, the stepped-up air strikes began as the siege became a subject of international media scrutiny; an accident of geography meant that journalists, refugees and others were able to watch every turn in the battle from hills across the border.

“Now, my goal is to defeat and ultimately destroy ISIL,” Gen Austin said. “And if [it] continues to present us with major targets, as [it] has done in the Kobane area, then clearly, we’ll service those targets.”

US steps up air strikes

As the militants have been put on the defensive over the past few days, the number of air strikes has decreased.

US military officials said they had conducted six air strikes in Kobane on Thursday and Friday, a sharp decline from the 37 attacks carried out over a three-day period earlier in the week.

“ISIS is retreating and we are advancing,” said a commander serving with a unit of Syrian anti-government rebels who have allied themselves with the Kurds.

“Air strikes destroyed most of their heavy weapons,” said the commander, who uses the nom de guerre Abu Hasan.

The militants had also lost their supply lines and were no longer able to move freely in and out of the city, he said.

“Those who are left in the city centre don’t have a way out,” he added.

Abu Hasan and his fighters chased a group of militants to a hill about five kilometres west of Kobani, overrunning their position with the help of air strikes. He said his unit had not been able to advance farther because of sniper fire but that he did not expect the resistance to last long.

“We caused ISIS losses in equipment and souls,” he said. “The battle will be ending soon.”

Signs of the toll on the militants began to emerge Friday.

On a cellphone purportedly captured from a dead Islamic State fighter, voice messages sent to a friend, according to a rebel media activist who heard them, revealed the sudden swing of the battle: from supreme confidence that the capture of Kobane would take 10 days to laments as the militants were surrounded by Kurdish fighters, who had “popped up” everywhere.

“All of my group is killed now, and I’m left alone here,” the activist quoted the militant as saying.

As Kobane braced for any regrouping by the Islamic State, Kurdish and rebel fighters took advantage of the calm.

Ahmed Bouzi, a 21-year-old fighter who had smuggled himself out of Kobane to buy medicine in Turkey, marvelled at the shift from just weeks ago, when he and 50 others were retreating under fire as what felt like thousands of militants closed in on them.

“They are retreating, slowly,” he said before heading back to Kobane, just in case.