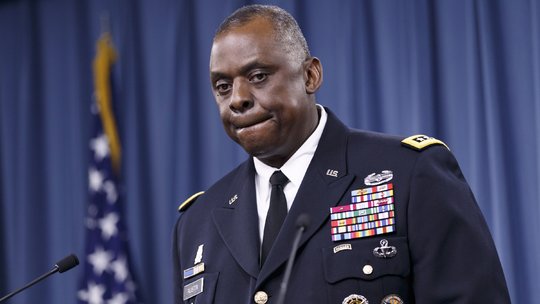 Gen. Lloyd J. Austin, head of Central Command, said airstrikes against the Islamic State were working but the mission was “far from over.” Publish Date October 17, 2014. Photo by J. Scott Applewhite/Associated Press.
Share:

Increased airstrikes over the besieged Syrian city of Kobani have allowed the American-led coalition to take out large numbers of Islamic State fighters, the top American commander for the Middle East said on Friday.

Gen. Lloyd J. Austin, the head of the United States Central Command, acknowledged that the Sunni militant group might still manage to take Kobani, but indicated that even if it did, it would be a costly victory that could eventually help the United States and its allies in other parts of Syria as well as in Iraq.

“What’s going on in the Kobani area is that, in my assessment, the enemy has made a decision to make Kobani his main effort,” General Austin said during a rare appearance before reporters at the Pentagon. He said that fighters from the group, also known by the acronyms ISIS or ISIL, had poured into Kobani.

“Now, my goal is to defeat and ultimately destroy ISIL,” he said, using an acronym for the Islamic State. “And if he continues to present us with major targets, as he has done in the Kobani area, then clearly we’ll service those targets.”

The United States carried out 14 airstrikes around Kobani on Wednesday and Thursday, the Pentagon said. The attacks blasted what officials described as Islamic State buildings, command posts, fighting positions, sniper positions, a staging location and one heavy machine gun.

Still, Central Command noted in a news release on Thursday that “the security situation on the ground in Kobani remains tenuous.”

During his appearance before reporters on Friday, General Austin echoed that. “It’s highly possible that Kobani may fall,” he said.

But he noted that Kurdish fighters had managed to regain territory that had been lost previously, adding that they had done “a yeoman’s work in terms of standing their ground.”

Defense officials noted that the more Islamic State fighters that the United States and its allies were able to kill in Kobani, the fewer they would have to fight in other parts of Syria and in Iraq.

They also attributed the increase in airstrikes in and around Kobani to a little-known new system where Syrian Kurdish fighters fed target information to allied war planners.

General Austin defended the American plan to train 5,000 members of the moderate Syrian opposition to fight the Islamic State, and said that in eight months to a year the Sunni militant group would look much more different after undergoing a year of airstrikes from the United States and its allies.

“My personal opinion,” he said, “is that they’ll be much degraded from what they are now, and so I think a well-trained force that’s well equipped and well led will have a real good chance of being successful.”