ISIS states its justification for the enslavement of women 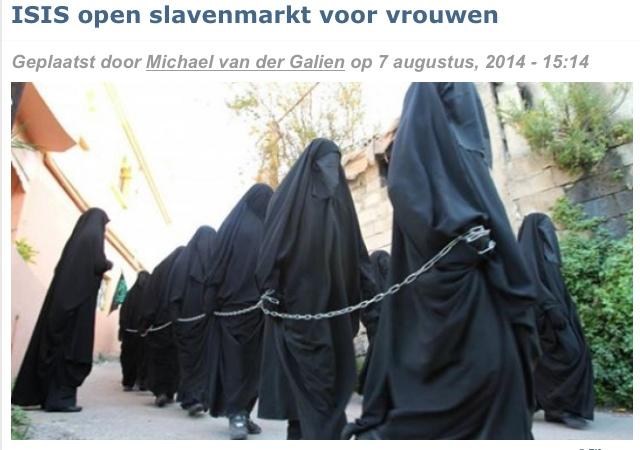 In a new publication, ISIS justifies its kidnapping of women as sex slaves citing Islamic theology, an interpretation that is rejected by the Muslim world at large as a perversion of Islam.

“One should remember that enslaving the families of the kuffar — the infidels — and taking their women as concubines is a firmly established aspect of the Shariah, or Islamic law,” the group says in an online magazine published Sunday.

The title of the article sums up the ISIS point of view: “The revival (of) slavery before the Hour,” referring to Judgment Day.

The fourth edition of the group’s English-language digital magazine called “Dabiq” said that female members of the Yazidi sect, an ethnically Kurdish minority living mostly in Iraq, may legitimately be captured and forcibly made concubines or sexual slaves.

The rationalization for a return to slavery — repudiated around the world — coincided with the release of a Human Rights Watch report on crimes committed by ISIS against the Yazidis in Iraq based on interviews with 76 displaced people in Dohuk.

“The Islamic State’s litany of horrific crimes against the Yazidis in Iraq only keeps growing,” said Fred Abrahams, special adviser at Human Rights Watch. “We heard shocking stories of forced religious conversions, forced marriage, and even sexual assault and slavery — and some of the victims were children.”

A 17-year-old kidnapped girl named Adlee recounts how a large bearded man forced her into a home in Falluja, where she was beaten and endured violent sexual advances before escaping two days later, the Human Rights Watch report reads.

ISIS forced tens of thousands of Yazidis to flee their homes in August when the extremists stormed many of the community’s towns and cities in Iraqi Kurdistan. Displaced families and monitoring groups reported jihadists kidnapped hundreds of Yazidi women and girls, and many were sold or given away to militants as “spoils of war.”

The terror group’s 56-page propaganda publication also boasts of a “massacre against (Kurdish) PKK soldiers” alongside graphic images of slain men dressed in fatigues. On the next page, ISIS glorifies its “Services for Muslims” with photographs of a care home for the elderly and a cancer treatment center for children.

The issue, titled “The Failed Crusade,” includes an alleged copy of slain American journalist Steven Sotloff’s last letter to his mother and says the victim’s Jewish identity warranted his beheading by ISIS.

Another ISIS captive, British journalist John Cantlie, allegedly pens the last section of the magazine, saying he expects to be killed soon, and “unless something changes very quickly and very radically, I await my turn.”