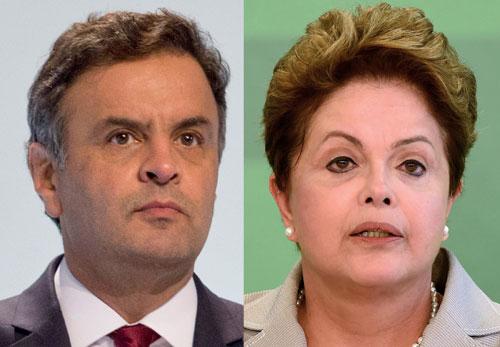 Marina Silva, a popular environmentalist who finished third in the first-round of Brazil’s presidential election, gave her endorsement Sunday to the leading opposition candidate in the runoff with President Dilma Rousseff set for Oct. 26.

The endorsement from Silva comes as Rousseff appeared to be in a tight race with Aecio Neves, a business-minded former governor who has promised to open Brazil’s economy and boost its growth.

The two candidates are in a statistical tie according to surveys by the polling firms Datafolha and IBOPE. Some 51 percent of voters surveyed in the last week supported Neves, compared to 49 percent for Rousseff. Both polls had a margin of error of 2 percentage points.

In the weeks before the first-round vote on Oct. 5, Silva had for a time led Rousseff in voter surveys, and many were surprised to see her finish behind Neves. After the election, his campaign said an endorsement by Silva would be key to their attempt to upset Rousseff’s bid for a second term.

Silva waited a week to announce her support of Neves.

“I will vote for Aecio and support him,” she said Sunday. “I trust in the sincerity of the proposals of the candidate and his party, and I give to the Brazilian society the task to see that they are fulfilled.”

Polls conducted before the first-round vote suggested as many as 60 percent to 70 percent of Silva’s supporters would choose to back Neves if he became the candidate to challenge Rousseff in the runoff.

Neves defied expectations by finishing second in the first round, winning 34 percent of the vote to Rousseff’s 42 percent.

Silva, who finished with 21 percent of votes, had been a strong contender after she was thrust into the Socialist Party’s nomination after its initial presidential candidate was killed in a plane crash in August. But her support waned after Rousseff launched an aggressive campaign to discredit her skills.

Neves, of the right-leaning Social Democracy Party, has said the fact that opposition candidates as a whole outpolled Rousseff in the first round indicates that Brazilians are eager for change after 12 years of rule by the president’s Workers’ Party.

Whether Silva’s supporters will give Neves the backing he needs to topple Rousseff, however, is not certain.

“I don’t think that an endorsement of Marina or of her party guarantees that her voters will follow,” said Francisco Fonseca, political analyst with Getulio Vargas Foundation. “In Brazil, unlike other countries, party loyalty is not as strong, it’s not a personal, family or generational matter. Here they vote more for people than for parties.”

Rousseff has strong support from Brazil’s poor, many of whom have benefited from her party’s social programs. She has warned that a movement away from her protectionist trade policies would set back the advances made over the last 12 years. Nevertheless, her showing in the first round was the weakest for a Workers’ Party candidate in 16 years.

Neves’ Social Democracy Party, Brazil’s most powerful opposition group, held the presidency between 1994 and 2002, when President Fernando Henrique Cardoso was credited with stabilizing inflation. Neves also has the advantage of family legacy: His grandfather Tancredo Neves, was a cherished politician who was chosen to become Brazil’s first post-dictatorship president in 1985 but fell ill and died before taking office.