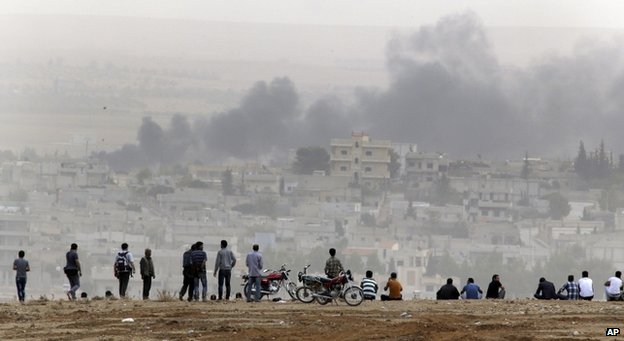 Civilians watch the fighting in Kobane from the safety of the Turkish side of the border
Share:

At least 553 people are said to have died in a month of fighting for Kobane, the Kurdish town just inside Syria under Islamic State (IS) attack.

The Syrian Observatory for Human Rights, a UK-based Syrian opposition body which monitors the conflict, counted 298 IS fighters among the dead.

US aircraft have bombed IS positions as Kurdish fighters cling on to the town’s vital border crossing with Turkey.

But the defenders say they are outgunned on the ground.

“The supply of fighters is very good…” Kobane official Idris Nassan told Reuters news agency. “But fighters coming without arms, without weaponry, is not going to make a critical difference.”

Correspondents watched from just over the border in Turkey on Saturday as fighting raged for the town.

Turkey, wary of its recent long conflict with its own large Kurdish population, has ruled out any unilateral ground intervention.

Some 200,000 Syrian Kurdish refugees have crossed the border since the IS advance began nearly a month ago.

Meanwhile, fighting has continued in Iraq, where IS overran large parts of the north during the summer.

‘More than 1,000’
According to the Observatory, the true figure for deaths in the siege of Kobane could be more than 1,100 since the IS attack began on 16 September.

Of the deaths it has been able to document, 226 are of Kurdish fighters and nine are of other Syrian opposition fighters, who were fighting on their side.

Of the 20 civilian deaths recorded, 17 were victims of IS executions, it said.

Kobane resounded to small-arms fire and explosions on Saturday following the failure of a pre-dawn IS offensive to take more ground.

According to the Pentagon, US air strikes on IS targets at Kobane since Friday have hit an IS fighting position; damaged a command and control facility; destroyed a staging building; struck two small units of fighters; and destroyed three lorries.

Mr Nassan said the air strikes had helped the Kurdish fighters regain some territory in the south of the city but they were not enough.

“A few days ago, [IS] attacked with a Humvee vehicle, they use mortars, cannons, tanks,” he said. “We don’t need just Kalashnikovs and bullets. We need something effective since they captured many tanks and military vehicles in Iraq.”

In Europe, at least 20,000 Kurds living in Germany marched in the city of Duesseldorf on Saturday to highlight the threat to Kurds in Kobane.

At a smaller rally in the Austrian town of Bregenz, two people were stabbed and seriously wounded when Kurdish protesters clashed with a rival demonstration, said to involve Turks and Chechens.

Car bombs
At least 38 people were killed and many more injured in three bomb attacks in the Iraqi capital Baghdad.

Elsewhere in Iraq, at least 14 people were killed: four injured soldiers died when their ambulance was attacked in a “friendly fire” incident near Baquba while a suicide bomber killed at least seven people in a market in Meshahda, near Baghdad.

US and other aircraft from the international coalition carried out air strikes on IS targets inside Iraq as well as dropping supplies to Iraqi government forces at Baiji, where Iraq’s biggest oil refinery is located.

IS fighters control large stretches of territory in Syria and Iraq. The group is known for its brutal tactics, including mass killings, abductions of members of religious and ethnic minorities, and the beheadings of soldiers and journalists.