Canada decided to join the war against Islamic State 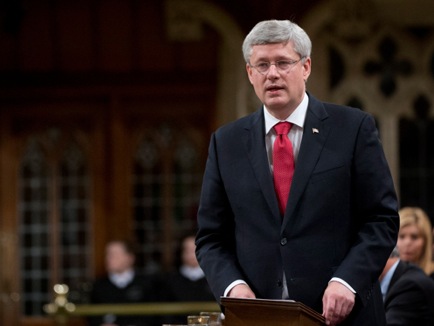 Prime Minister Stephen Harper speaks about the government’s motion on a combat mission in Iraq, on Oct. 3., 2014
Share:

Canadian legislators on Tuesday approved government plans to send fighter jets to Iraq, where they will take part in U.S.-led air strikes against Islamic State militants for up to six months.

The result of the vote was never in doubt, since the ruling Conservatives have a majority in the House of Commons. Members of Parliament voted 157-134 in favor of the mission.

The two main opposition parties had opposed the mission on the grounds that Prime Minister Stephen Harper had not given enough details and could drag the country into a long drawn-out war.

Harper has promised that Canada will not deploy ground troops against Islamic State.

The United States has been bombing Islamic State and other groups in Syria for more than two weeks with the help of Arab allies, and hitting targets in Iraq since August. European countries have joined the campaign in Iraq but not in Syria.

Harper said that unless the Islamic State is stopped it could mount attacks around the world, including in Canada.

The SITE Intelligence Group on Tuesday said an alleged Islamic State fighter had used Twitter to call for attacks on Canada. It named the man as Abu Khalid Al-Kanadi, a name that indicates he comes from Canada.