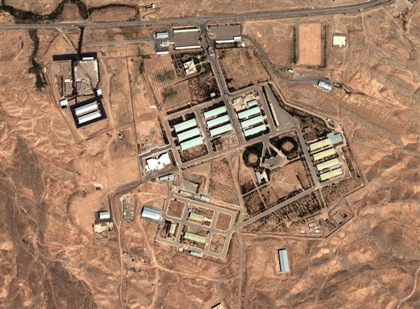 Iranian media report a massive blast at the military site near Tehran where nuclear detonators are suspected of having been tested years ago.

Iranian opposition site Sahamnews described the incident as an explosion near Parchin that shattered windows 9 miles away.

The United Nations nuclear watchdog, the International Atomic Energy Agency, has sought access to the Parchin military complex, about 20 miles southeast of Tehran, since it was provided documents that described alleged nuclear detonator tests at the site.

In 2011, IAEA investigators described “a large explosive containment vessel” at the site more than a decade ago, according to a confidential report obtained by the Associated Press. Later U.S. and IAEA reports described demolition at the site that U.S. diplomats have said look like efforts to destroy evidence of what happened there.

Iran, which claims its nuclear program has peaceful aims, says it tested “exploding bridge wires” at the site, and not nuclear detonators. But it has yet to allow the IAEA to inspect the site.

The explosion is the latest involving Iran’s nuclear facilities and its ballistic missile engineers. The causes have not been verified. Israel has threatened to resort to military action to prevent an Iranian nuclear weapon.

It occurred as Iran and six world powers including the United States are seeking a final agreement on lifting economic sanctions against Iran in exchange for verifiable limits on its nuclear program. President Obama has said he will not allow Iran to obtain nuclear weapons.