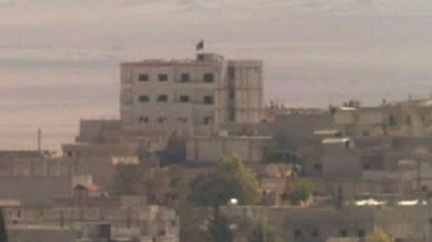 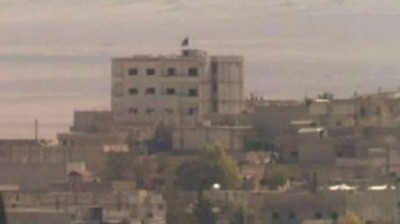 Islamic State militants raised their flag on a building on the eastern outskirts of the Syrian border town of Kobani on Monday after an assault of almost three weeks, but the town’s Kurdish defenders said they had not reached the city centre.

A black flag belonging to Islamic State was visible from across the Turkish border atop a four-storey building close to the scene of some of the most intense clashes in recent days.

Local sources inside Kobani confirmed the group had planted its flag but said that Kurdish forces had repelled their advances so far.

The radical al Qaeda offshoot has been battling to seize the predominantly Kurdish town after taking over large swathes of territory in Syria and Iraq in recent months.

Air strikes by American and Gulf state warplanes have failed to halt the advance of the Islamists, who have besieged the town from three sides and pounded it with heavy artillery.

“During the day sometimes IS makes advances but YPG pushes them back. There are clashes within the vicinity, but they are not inside the city, YPG is resisting,” said Pawer Mohammed Ali, a translator for the Kurdish Democratic Union Party (PYD) inside Kobani.

Mortars have rained down on residential areas in Kobani and stray fire has hit Turkish territory in recent days, but Kurdish pleas for help have so far largely gone unanswered.

Islamic State wants to take Kobani to consolidate a dramatic sweep across northern Iraq and Syria, in the name of an absolutist version of Sunni Islam, that has sent shockwaves through the Middle East.

Beheadings, mass killings and torture have spread fear of the group across the region, with villages emptying at the approach of pick-up trucks flying Islamic State’s black flag.

“If they enter Kobani, it will be a graveyard for us and for them. We will not let them enter Kobani as long as we live,” Esmat al-Sheikh, head of the Kobani Defence Authority, said by telephone earlier on Monday.

“We either win or die. We will resist to the end,” he added as heavy weapons fire echoed from the eastern side of town.