Syria’s Alawites protest against the Assad regime for first time 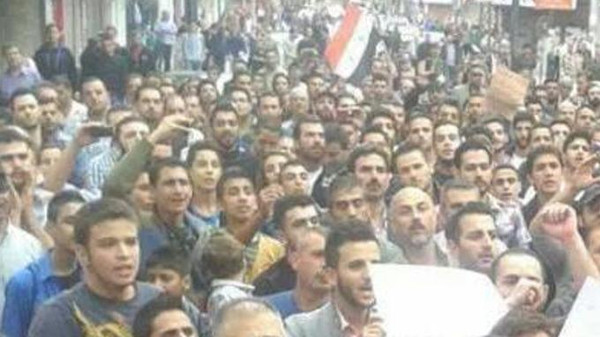 The protest was the first of its kind by members of the Alawite sect from which President al-Assad drawn staunch support since the 2011 uprising against his rule. (Al Arabiya)
Share:

Member of Syrian President Bashar al-Assad’s Alawite sect took to the streets in the city of Homs on Thursday to protest the horrific twin bombing at an elementary school.

The protest was the first of its kind by members of the Alawite sect from which President al-Assad draw staunch support since the 2011 uprising against his rule.

Assad’s most loyal army generals and security officers mainly hail from the Alawite sect, which is an offshoot of the Shiite Islam that is followed by Assad’s regional ally Iran.

The school bombing, which took place in Homs’ neighborhood of Akrama killed 31 people, mostly children, and wounded 74 others.

A Syrian state television reporter covering the protest was reportedly attacked by the angry protesters, who chanted anti-government slogans and demanded the departure of the Homs governor.

“Liar, Liar, the Syrian media is a liar,” the protesters chanted.

The state TV reporter was captured in a video posted on YouTube telling her cameraman while interviewing a protester: “don’t show this, don’t show this.”

Since the Syrian revolution erupted three years ago, the Alawites have generally rallied in support for Assad, himself an Alawite.

In an interview with Al Arabiya on Tuesday, Free Syrian Army Chief Brigadier Abdel Ilah al-Bashir called upon “whoever has remained in the Syrian army, especially our families from the Alawite sect to leave that sinking ship, in which they were used as fuel, and join the frontlines and assume their leading positions which await them in the Free Syrian Army lines.”

“After proving its moderation and patriotism, the Free Syrian Army is the only option for the Syrian people’s salvation, regardless of their affiliations and sects,” he told Al Arabiya News Channel,” he added.

Monzer Makhous, the Syrian National Coalition’s (SNC) ambassador to Paris, told Al Arabiya that “the existence of Alawites in the opposition is almost non-existent,” adding that the Alawites still form the “backbone” of Assad’s security regime.

Meanwhile, former member of the opposition Syrian national Coalition Rima Fleihan said it was important that “all the components of the Syrian people who stand together to end the rule of dictatorship and terrorism.”

“Fleihan said the Assad’s regime used the extremist groups to damage the reputation of the revolution and frighten minorities.