ISIS advances in Iraq, but in Syria being attacked by US jets 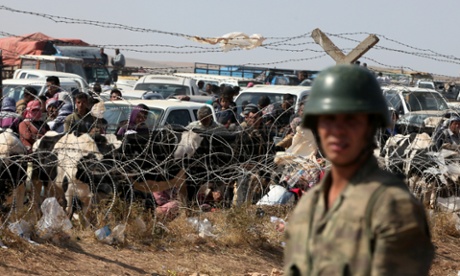 A Turkish soldier stands guard as Syrians from Kobani wait to enter Turkey at the border crossing of Yumurtalik on Thursday. Photograph: Burhan Ozbilici/AP
Share:
US-led war planes attacked Islamic State (Isis) targets around the Syrian border town of Kobani overnight as the insurgents pressed their assault against its Kurdish defenders, a monitoring group and witnesses said.

On Friday, a video was released of the murder of a British aid worker,Alan Henning, the fourth western hostage killed in recent weeks, and warning that an American, Peter Kassig, would be killed next.

On Saturday, fighting continued around Kobani while in Iraq, Isis fighters captured the town of Kubaisa, in the western Anbar province, two days after the fall of the nearby town of Hit. The fall of Kubaisa jeopardises the Ain al-Asad military base, which allows Iraqi forces to send troops and supplies to defend the Haditha dam further west.

Also on Saturday, the Pakistani Taliban declared allegiance to Islamic State and ordered militants across the region to help the group in its campaign to set up a global Islamic caliphate.

“Oh our brothers, we are proud of you in your victories. We are with you in your happiness and your sorrow,” Taliban spokesman Shahidullah Shahid said in a statement sent to Reuters by email from an unknown location.

“In these troubled days, we call for your patience and stability, especially now that all your enemies are united against you. Please put all your rivalries behind you …

“All Muslims in the world have great expectations of you … We are with you, we will provide you with Mujahideen [fighters] and with every possible support.”

In Turkey, President Recep Tayyip Erdogan demanded and received an apology from the US vice-president, Joe Biden, over comments in which Biden said the Turkish leader had admitted Turkey had made mistakes by allowing foreign fighters to cross into Syria.

Erdogan denied ever saying that and told reporters in Istanbul that Biden “will be history for me if he has indeed used such expressions”.

The White House said Biden spoke to Erdogan on Saturday “to clarify comments”, and said Biden apologised “for any implication” that Turkey or other allies had intentionally supplied or helped in the growth of the Isis group or other extremists in Syria.

Responding to questions following his speech at the Harvard Kennedy School on Thursday, Biden described Erdogan as “an old friend” and added: “He [Erdogan] said: ‘You were right. We let too many people through.’ Now they’re trying to seal their border.”

Erdogan said: “I have never said to him that we had made a mistake, never. If he did say this at Harvard then he has to apologise to us. Foreign fighters have never entered Syria from our country. They may come to our country as tourists and cross into Syria, but no one can say that they cross in with their arms.”

The killing of Henning, meanwhile, drew immediate condemnation from western leaders. The British prime minister, David Cameron, said: “It is senseless. It is completely unforgivable. Anyone in any doubt about this organisation [Isis] can now see how truly repulsive it is and barbaric it is.

“This is going to be our struggle now, that with others we must do everything we can to defeat this organisation. We must take action against it and we must find those responsible.”

Previous coalition air strikes have failed to stop the insurgent offensive on the predominantly Kurdish Kobani and outgunned Kurdish fighters have put up a desperate fight as shells rained down on the town over the past week. Isis shelled the town again on Saturday and its Kurdish defenders said they were expecting a new assault. Saturday’s barrages were less intense than the previous day.

“Clashes continue now, they are shelling on all three fronts. They tried to invade Kobani last night but they were repelled,” senior Kurdish official Asya Abdullah told Reuters from the town.

“We think they are planning to launch another big attack but YPG is prepared to resist them,” she said, referring to the Kurdish armed group defending the town.

An estimated 180,000 people have fled across the border into Turkey to escape the bloodshed. Isis fighters have vowed to take Kobani within days, saying they would pray in its mosques for Eid, which began on Saturday.

Warplanes from the US-led coalition of western and regional forces carried out raids in the countryside to the east and south of Kobani on Friday night, the British-based Syrian Observatory for Human Rights said. One Islamic State vehicle was destroyed.

Friday’s shelling of Kobani was the heaviest yet, according to Parwer Mohammed Ali, a translator with the Kurdish Democratic Union Party (PYD) who is inside the town.

“Shelling normally calms at night because Isis is afraid of being spotted by the jets but last night they continued the severe shelling and tried to invade,” Parwer said.

Around 90 shells had hit the town and at least two civilians were killed in Friday’s fighting. Three air strikes were audible from the south and east of the town on Friday evening, Parwer said.

Isis stepped up its offensive close to the Turkish border last month, seizing surrounding villages and advancing to within a few miles of Kobani, which is also known as Ayn al-Arab. Its capture would allow Isis to consolidate its hold on swaths of territory in Syria and Iraq.

Although there is little evidence of a firm alliance yet between IS and al-Qaida-linked Taliban commanders, Isis activists have been spotted recently in the Pakistani city of Peshawar, distributing pamphlets praising the group, and Isis flags have been seen at street rallies in Indian-administered Kashmir.

Swift offensives by Isis since June have sent shockwaves through Syria and Iraq and attracted thousands of so-called “foreign fighters” to their cause.

The US, with support from western and regional allies, has carried out a series of bombing raids to halt the insurgents’ rapid advance.