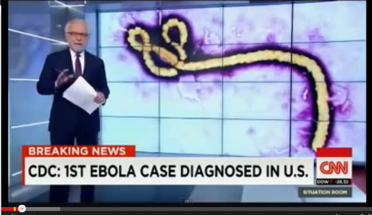 Parents rushed to get their children from school Wednesday after learning that five students may have had contact with the Ebola patient in a Dallas hospital, as Gov. Rick Perry and other leaders reassured the public that there is no cause for alarm.

The patient, identified by The Associated Press as Thomas Eric Duncan of Liberia, arrived in the U.S. on Sept. 20 to visit family. Dallas County Health and Human Services Director Zachary Thompson said county officials suspect that 12 to 18 people may have had contact with Duncan.

“This case is serious,” Perry said during a news conference at Texas Health Presbyterian Hospital Dallas, where Duncan is being treated. “Rest assured that our system is working as it should. Professionals on every level on the chain of command know what to do to minimize this potential risk to the people of Texas and of this country.”

“Since none of the students had symptoms, I’m pretty confident that none of the kids were exposed,” Miles said.

At L.L. Hotchkiss, parents pulled their children out of school early.

“I’m scared,” said parent Kia Collins, who has four children at the school ages 5 to 11. “I may keep them home all week.”

District officials said they plan to have counselors and translators reach out to parents: 32 languages are spoken just at Conrad High.

“That’s one of the reasons we’re here is we don’t want misinformation getting out there,” Miles said. “We found out this morning, and then we had a press conference.”

He urged parents to keep their children in school, but some were wary. Marcie Pardo said she picked up her 8-year-old daughter, Soriah, within minutes of being notified by school officials.

“To find out this is a school where it is happening, what are the odds?” Pardo said. “I’m sure there could have been some kind of contact somewhere.”

A letter to parents of children at Hotchkiss, 6929 Town North Drive, said the school was notified Wednesday that “one of our students may have had contact with an individual who was recently diagnosed with the Ebola virus.”

The letter goes on to say that the student has no symptoms, has been told to stay home and is under observation by the Dallas County Health and Human Services Department.

“… There is nothing to suggest that the disease was spread to others, including students and staff,” the letter says.

The Ebola virus is not spread through the air but through contact with bodily fluids — sweat, blood, saliva and other secretions.

When Duncan arrived in the U.S., he was not showing any symptoms, officials said.

But The New York Times reported Wednesday that he had contact with an Ebola patient Sept. 15, four days before he left Liberia for the United States, according to the parents of the woman who had Ebola and Duncan’s neighbors in Liberia.

Marthalene Williams, 19, was taken by taxi to a hospital with Duncan’s help Sept. 15 after failing to get an ambulance, her parents, Emmanuel and Amie Williams, told The Times. She was convulsing and seven months pregnant.

Duncan was a family friend and a tenant in a house owned by the Williams family. He rode in the taxi in the front passenger seat while Marthalene Williams, her father and her brother, Sonny Boy, shared the back, her parents said. Duncan helped carry Marthalene Williams, who was no longer able to walk, back to the family home that evening, neighbors said.

Just like Duncan, Sonny Boy, 21, became ill about a week ago, his family said.

An ambulance came to their house Wednesday to pick up Sonny Boy. A woman and her daughter from the same area were also picked up by an ambulance while a team came to retrieve the body of yet another woman. The Times reported that all four appeared to have been infected from a chain reaction that began with Marthalene Williams.

Reuters and other media outlets reported that Duncan traveled through Brussels on his way to the U.S.

A Belgian official told the news service that Duncan left Monrovia on Sept. 19 aboard a Brussels Airlines jet to the Belgian capital. After a layover of nearly seven hours, he boarded United Airlines Flight 951 to Dulles Airport near Washington, D.C. After another layover of nearly three hours, he flew on Flight 822 from Dulles to Dallas/Fort Worth Airport, the airline confirmed.

The federal Centers for Disease Control and Prevention typically notify an airline when they learn that an infectious person traveled on that carrier. The airline then turns over the flight manifest to the CDC, and health officials notify other passengers while the airline deals with crew members.

In this case, the CDC told United but not the public what flights the man took. In an interview Wednesday with The Associated Press, Dr. Thomas Frieden, the CDC director, suggested that doing so would divert public health resources away from controlling an outbreak.

He said the CDC was focused on finding anyone who came in contact with Duncan after he began showing symptoms.

The AP reported that Duncan’s sister, Mai Wureh, said her brother went to the Dallas emergency room Friday and was sent home with antibiotics. He told her that hospital officials asked for his Social Security number and that he said he didn’t have one because he was visiting from Liberia.

“He was not exhibiting symptoms consistent with keeping him. If the person is not exhibiting the symptoms, there would be no reason to keep them,” Texas Health Resources spokesman Wendell Watson said. “That’s a judgment call one of the carriers would have to make. We are following up as well as the CDC and Texas Department of State Health Services.”

Another Texas Health Resources representative, Candace White, released a statement Wednesday afternoon saying, in part, that when Duncan arrived Friday, “the patient presented with low grade fever and abdominal pain. His condition did not warrant admission.”

Duncan was listed in serious condition Wednesday, White said in a statement.

Dallas County Judge Clay Jenkins said county officials are following the CDC’s lead. If the people who came in contact with Duncan did not isolate themselves, more serious steps could be taken, Jenkins said.

Jenkins said county health officials would be “the boots on the ground” to get out the message to residents of the neighborhood where Duncan had been. But many people in that neighborhood, Vickery Meadow in northeast Dallas, said they had learned about the Ebola case from the hordes of reporters combing through the area.

Dallas County officials, who have not identified the patient as Duncan, said the case is the only known occurrence of the deadly virus.

“We are closely monitoring the Ebola case in Dallas. There are no cases or known contacts in Tarrant County at this time,” said Vinny Taneja, the agency’s director. “We feel confident that residents in our community are safe.”

The Texas Department of State Health Services issued an alert Wednesday outlining what providers should watch for as they evaluate patients.

Patients who have those symptoms and who have been in contact with someone believed to have Ebola or who have been in Liberia, Sierra Leone, Guinea or Nigeria in the past 21 days should be considered a person under investigation and should be tested, the alert says.

The alert notes that the virus does not generally spread through air, water or food, except in Africa, where handling or eating raw bushmeat can spread it.

The CDC said Wednesday that a team of 10 experts had arrived in Dallas to assist local officials — three senior scientists with expertise in public health investigations and infection control, five epidemic intelligence service officers, a public health adviser and a communications officer.

“We are stopping Ebola in its tracks in this country,” Frieden said in a news release. “We can do that because of two things: strong infection control that stops the spread of Ebola in health care; and strong core public health functions to trace contacts, track contacts, isolate them if they have any symptoms and stop the chain of transmission. I am certain we will control this.”

Ebola has infected a few Americans who traveled to West Africa, including Dr. Kent Brantly, who did his residency at John Peter Smith Hospital in Fort Worth. Brantly, who survived, was doing missionary work in Liberia when he was infected.

A spokesman at Samaritan’s Purse, for whom Brantly was working, said Wednesday that he is not releasing any statement about the Dallas case.