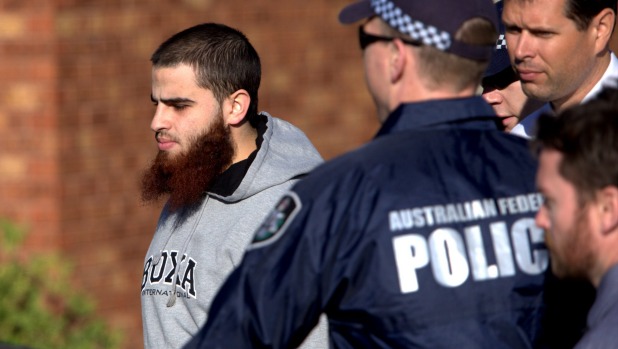 A man is led away by police as simultaneous raids are carried out across Melbourne.
Share:

A man has been charged with making funds available to a terrorist organisation after more than 100 federal and state officers raided properties across Melbourne.

Australian Federal Police (AFP) Assistant Commissioner Neil Gaughan said the 23-year-old man from Seabrook was arrested for allegedly providing $12,000 to a US citizen fighting in Syria.

The Assistant Commissioner said today’s arrest came after a tip off from the FBI.

“The search warrants were the culmination of an eight month investigation which began following information provided by the United States Federal Bureau of Investigation,” he said.

The Assistant Commissioner said they had acted because there was concern the man was about to make another transaction to the man in Syria.

Police said they believed the man was acting alone.

The AFP said it had conducted seven search warrants in Seabrook, Kealba, Meadow Heights, Broadmeadows and Flemington, in raids that began at 6:45 am (AEST).

The police also said the raids were not related to last week’s stabbing of two police officers and subsequent shooting of Numan Haider, and no firearms or explosives had been seized.

“There is no information or intelligence to indicate that this man was involved in planning an attack, nor there are any known links to the 18-year-old man involved in last week’s Endeavour Hills incident,” the Assistant Commissioner said.

“There can be no doubt that law enforcement and security agencies are currently operating in a complex environment and there has been heightened operational activity in the last 12 months.”

“There was a large amount of electronic evidence seized during the search warrants and that will be analysed by our investigators in the coming months to get more evidence in relation to the commission of this offence,” he said.

“For privacy reasons we won’t go into the details of the background of the gentleman involved this morning.”

The Assistant Commissioner said this was the first time police were aware “someone has sponsored someone to go and fight”.

The raids came less than three weeks afterAustralia’s terrorism alert level was raised to high, meaning an attack is likely, though authorities said they did not know of a specific threat.

Prime Minister Tony Abbott said security agencies had recommended the increased threat level because of the number of Australians “fighting with and supporting” terrorist groups in the Middle East.

Earlier this month more than 800 police conducted synchronised raids of houses and vehicles in Sydney and Brisbane.

About eight plain and uniformed officers, mainly from the AFP, as well as a sniffer dog, were involved in today’s operation at Seabrook.

Forensic officers arrived at the Seabrook property, on Point Cook Road, just before 11:00 am (AEST).

Victoria Police Deputy Commissioner Graham Ashton said the latest raids were conducted in a low-key manner to reassure the public there was no risk to community safety.

“I want to reinforce the fact that there was no direct threat to any community safety from this operation conducted this morning,” he said.

“This relates to the funding of overseas terrorist activity where we will be alleging that this individual in Melbourne has been orchestrating a process to fund and contribute funds to the overseas organisations that are prescribed terrorism organisations.”

He said the family of Numan Haider had received death threats following his death last week.

“This is an innocent family, they weren’t involved in this investigation.

“They are in the process of grieving and they need to be left alone to grieve.”

Deputy commissioner Ashton urged the community to act responsibly regarding the terror threat.

“We have also had examples of some racially motivated crimes occurring in the days since last week,” he said..

“I want to reinforce what I reinforced last week, that this is not about any religion.

“This is about criminals undertaking criminal acts.”