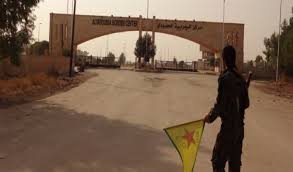 Iraqi Kurdish troops drove Islamic State fighters from a strategic border crossing with Syria on Tuesday and won the support of members of a major Sunni tribe, in one of the biggest successes since U.S. forces began bombing the Islamists.

The victory, which could make it harder for militants to operate on both sides of the frontier, was also achieved with help from Kurds from the Syrian side of the frontier, a new sign of cooperation across the border.

“It’s the most important strategic point for crossing,”the source said.

The participation of Sunni tribal fighters in the battle against Islamic State could prove as important a development as the advance itself.

Members of the influential Shammar tribe, one of the largest in northwestern Iraq, joined the Kurds in the fighting, a tribal figure said.

“Rabia is completely liberated. All of the Shammar are with the Peshmerga and there is full cooperation between us,” Abdullah Yawar, a leading member of the tribe, told Reuters.

He said the cooperation was the result of an agreement with the president of Iraq’s Kurdish region after three months of negotiation to join forces against the “common enemy”.

Gaining support from Sunni tribes, many of which either supported or acquiesced in Islamic State’s June advance, would be a crucial objective for the Iraqi government and its regional and Western allies in the fight against the insurgents. 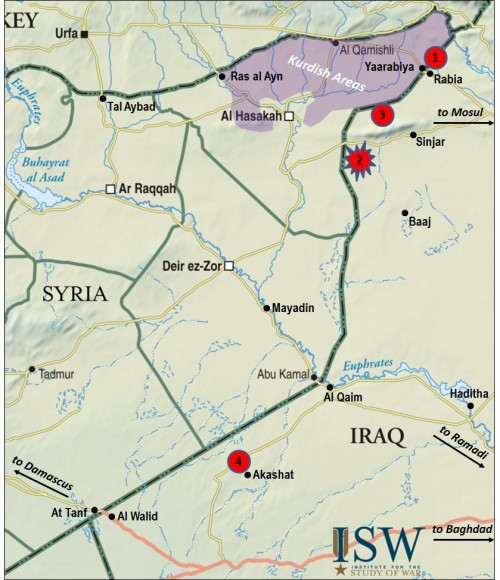 Winning over Sunni tribes was a central part of the strategy that helped the U.S. military defeat a precursor of Islamic State during the “surge” campaign of 2006-2007. Washington hopes the new Iraqi government can repeat it.

Rabia controls the main highway linking Syria to Mosul, the biggest city in northern Iraq, which Islamic State fighters captured in June at the start of a lightning advance through Iraq’s Sunni Muslim north that jolted the Middle East.

Twelve Islamic State fighters’ bodies lay on the border at the crossing after the battle, said Hemin Hawrami, head of the foreign relations department of the Kurdistan Democratic Party, one of the main Iraqi Kurdish parties, on Twitter.

Syrian Kurdish fighters said they had also joined the battle: “We are defending Rabia … trying to coordinate action with the Peshmerga against Islamic State,” said Saleh Muslim, head of the Syria-based Kurdish Democratic Union Party (PYD).

If Rabia can be held, its recapture is one of the biggest successes since U.S.-led forces started bombing Islamic State targets in Iraq in August.

It is one of two main border crossings between militant-held parts of the two countries, control of which has allowed Islamic State to declare a single Caliphate on both sides.

The ability to cross the frontier freely has been a major tactical advantage for Islamic State fighters on both sides. Fighters swept from Syria into northern Iraq in June and returned with heavy weapons seized from fleeing Iraqi government troops, which they have used to expand their territory in Syria.

Washington expanded the campaign to Syria last week in an effort to defeat the fighters who have swept through Sunni areas of both countries, killing prisoners, chasing out Kurds and ordering Shi’ites and non-Muslims to convert or die.

Washington hopes the strikes, conducted with help from European allies in Iraq and Arab air forces in Syria, will allow government and Kurdish forces in Iraq, and moderate Sunnis in Syria, to recapture territory.

Britain said its Tornado warplanes had launched their first attacks against Islamic State in Iraq since parliament approved combat operations last Friday, targeting a heavy weapons position that was endangering Kurdish forces and subsequently attacking an IS armed pick-up truck in the same area.

In Iraq, a coalition of Iraqi army, Shi’ite militia fighters and Kurdish troops known as Peshmerga have been slowly recapturing Sunni villages that had been under Islamic State control south of the Kurdish-held oil city of Kirkuk.

GROUND SHAKING BENEATH OUR FEET

Peshmerga secretary-general Jabbar Yawar estimated the Iraqi Kurds had now retaken around half the territory they lost when the militants surged north towards the regional capital Arbil in early August, an advance that helped to prompt the U.S. strikes.    Peshmerga fighters, Iraqi army troops and pro-government militia were advancing north from the Peshmerga-held city of Tuz Khurmatu to drive Islamic State fighters out of the countryside that surrounds Kirkuk, the official said. He credited U.S.-led air strikes with helping the Peshmerga clear the two villages.

“This area witnessed intense air strikes from U.S.-led strikes and Iraqi air strikes overnight and at dawn,” the official said.

The explosions shook Kirkuk itself: “We felt the ground shaking beneath our feet, and then we heard that there were air strikes outside Kirkuk,” said a policeman in the city.

In addition to aiding the Kurds in the north, U.S. air strikes have targeted fighters west of Baghdad and on its southern outskirts.

Iraqi officials said U.S. air strikes, along with strikes by Iraq’s own aircraft, had killed dozens of Islamic State fighters the previous day south of the capital.

“It appears that 67 (Islamic State) militants were killed in Fadiliya,” said an Iraqi security source, referring to a town south of the capital.

The U.S. military said it had conducted 11 air strikes in Syria and the same number in Iraq in the previous 24 hours, on Islamic State tanks, artillery, checkpoints and buildings.

Islamic State fighters have laid siege to Kobani, a Kurdish city on Syria’s border withTurkey. Sporadic gunfire could be heard from across the frontier, and a shell could be seen exploding in olive groves on the western outskirts of town.

A steady stream of people, mostly men, were crossing the border post back into Syria, apparently to help defend the town.

Ocalan Iso, deputy commander of the Kurdish forces defending the town, told Reuters Kurdish troops had battled Islamic State fighters armed with tanks through the night and into Tuesday.

The Syrian Observatory for Human Rights, a body that monitors the war with a network on the ground, said U.S.-led strikes had hit Islamic State positions west of Kobani.

The Observatory said Islamic State now controls 325 out of 354 villages on the rural outskirts of Kobani.

Turkey is likely to gain parliamentary approval for cross-border military operations in Syria and Iraq this week as Islamic State insurgents threaten its territory, but it will be hesitant to send in troops without an internationally-enforced no-fly zone.