Turkey Inching Toward Alliance With U.S. in Syria Conflict 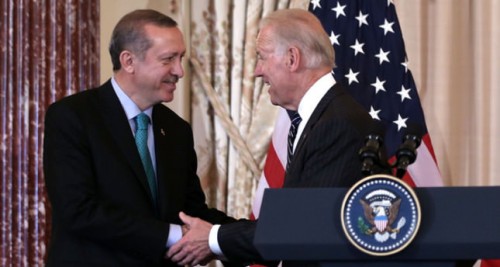 No American ally is closer to the threat of the Islamic State than Turkey, and no country could play a more important role in a coalition that President Obama is assembling to combat the extremist Sunni militants. Yet Turkey has been reluctant to enlist, in part because of the desperate conflict playing out on its border with Syria.

From frontier outposts, one can see black-clad Islamic State fighters climbing up a hill to peer down at Kobani, a besieged Kurdish city that has become the prize in a fierce battle between Syria’s embattled Kurds and the rampaging Sunni militants.

It is a violent, murky situation, with Turkish Kurds seeking to cross into Syria to help their Kurdish brethren fight, while Syrian Kurds are fleeinginto Turkey to escape the militants. The chaos on the border, and Turkey’s ambivalent reaction, is a reflection of Turkey’s complex interests in the Syrian civil war raging to its south.

Turkey is caught between conflicting interests: defeating Islamic militants across its border while not enhancing the power of its own Kurdish separatists.

The dilemma played out on Saturday here as outgunned Kurdish fighters battled the militants less than a mile away. At the same time, the United States conducted its first strikes against the extremist group in a besieged Kurdish area of Syria.

Mr. Obama wants Turkey to stop the flow of foreign fighters traveling through the country to join the Islamic State. As a NATO ally, Turkey could also take part in military operations and provide bases from which to carry out airstrikes in Syria and Iraq.

Turkish leaders have condemned the brutality of the Islamic State, but they worry that the American-led campaign against the militants will strengthen the Syrian Kurds, whose fighters maintain ties to Kurdish separatists in Turkey. Adding to that pressure is the fact that the United States is allied with Kurds in Iraq.

After intense lobbying by the Obama administration at the United Nations General Assembly last week, Turkey finally appears ready to take a more active role in the fight. President Recep Tayyip Erdogan of Turkey, who met with Vice President Joseph R. Biden Jr. on Thursday, returned home to declare that Turkey would no longer be a bystander. “Our religion does not allow the killing of innocent people,” he said.

On Saturday, in comments published in the newspaper Hurriyet, Mr. Erdogan said Turkey would defend its frontier pending authorization of military action in Syria expected at a special meeting of the Turkish Parliament on Thursday.

But the recruitment has been arduous, and Turkey’s military role is likely to be constrained by its complex interests in Syria. In a statement, the Obama administration said Mr. Biden and Mr. Erdogan had discussed the urgency of building a broad-based coalition to defeat the Islamic State “through a variety of means, including military actions.”

Mr. Obama, who gained backing for the coalition from the British Parliament on Friday, did not meet Mr. Erdogan in New York. But on Thursday, Mr. Obama called him to thank Turkey for taking care of “the massive influx of refugees flowing into Turkey, including tens of thousands this week alone.”

Turkey was initially reluctant to take an openly aggressive stance toward the Islamic State, because the militants had taken 46 Turkish citizens and three Iraqis hostage in Mosul, Iraq. On Sept. 20, Turkey obtained the release of the hostages in a covert intelligence operation. The circumstances of the release were murky — there were reports that Turkey had swapped prisoners for the hostages — but the return of the Turkish captives nevertheless stirred hopes that Turkey would feel less constrained in acting against the group.

Turkey’s most immediate concern, however, is the rise of tensions on its border. The United States and its Arab allies have carried out numerous airstrikes in eastern Syria, but until Saturday there had been no attacks around Kobani, a collection of mostly Kurdish farming villages, also known as Ayn al-Arab. Kurdish fighters had issued urgent calls for help, saying they had only light weapons and were struggling to hold off the extremists, whose fighters are armed with tanks and artillery.

Kurds on both sides of the border were angry that the United States had not protected Kobani, especially since an assault on Kurds from the minority Yazidi religious sect in Sinjar, Iraq, last month triggered the first American airstrikes against the Islamic State. Some Kurds suspected that the United States was ignoring Kobani to mollify Turkey.

A Turkish political analyst said the scenes at the border raised the possibility that Turkey sees the Kurds, and the semiautonomous zone they have carved out around Kobani during three years of civil war in Syria, as “a greater threat” than the Islamic State, which has seized parts of Iraq and Syria, imposing harsh rule in areas under its control.

Those competing priorities, said the analyst, Soli Ozel, a newspaper columnist and a lecturer at Kadir Has University in Istanbul, were likely among the remaining “sticking points” with the United States.

“Turkey will do something militarily,” he said, citing Mr. Erdogan’s comments to Hurriyet that he would consider using Turkish ground forces to set up a secure zone inside Syria. But one of Turkey’s goals, Mr. Ozel said, might be “to crush or dissolve the Syrian Kurdish autonomous zone.”

Several male residents of Kobani said in recent days that they had brought their families to safety in Turkey and planned to head back to fight. Some, presenting themselves as civilians, were allowed into Turkey after checks at a border post.

“If they need to locate them, I can insert a smart chip in my heart and go to the Islamic State fighters,” said Hajjar Sheikh Mohammad, 22, a Syrian Kurd trying to return to Syria to fight, suggesting that he would sacrifice himself to spot Islamic State targets.

On Friday, as the Islamic State fighters came closer, large crowds gathered on both sides of the border fence and broke it down. Hundreds of people streamed across. Entering Turkey were women, children and older men, one leading a cow. Entering Syria were hundreds of men, some carrying backpacks, one riding a motorcycle.

At first, the police and army forces withdrew, and the atmosphere was almost jovial, with people singing and standing on the fence. But then security forces returned, firing tear-gas canisters. A crowd of perhaps 1,000 people scattered in panic, and the security forces continued firing tear gas as the crowd fled on foot and in cars.

On Saturday, Syrian and Turkish Kurds cheered from hilltops dotted with fig and olive trees and foxholes as Kurdish fighters scaled a ridge and fired a heavy machine gun mounted on a pickup truck. Muzzle flashes could be seen as Islamic State fighters returned fire and zipped toward the front line in cars and on motorcycles. A Kurdish activist, Mustafa Ebdi, said from Kobani that an Islamic State command post, a tank and a cannon had been hit by an American strike.

Complicating the geopolitical issues is the fact that the Kurdish militants defending Kobani, the People’s Protection Units, are linked to the Kurdistan Workers’ Party, or P.K.K., the Turkey-based Kurdish militia that Turkey and the United States consider a terrorist group.

But the Kurdish militants in Kobani and Afrin further west have been among the more effective groups in Syria at carving out safe areas where Christians and Muslims have lived in relative safety and harmony.

That is what troubles Turkey, Mr. Ozel, the analyst, said. When Mr. Erdogan calls for “a buffer zone,” Mr. Ozel said, he could mean the Syrian Kurdish autonomous area, with Turkey “not only taking control, but changing the demographics” by resettling the overwhelmingly Arab Syrian refugees there.

Mr. Obama’s top military adviser, Gen. Martin E. Dempsey, has suggested that the Kurds could be a ground force partner in Syria much as they have been in Iraq, especially since plans to beef up Syrian insurgents to play that role will take months and may not succeed.

Though that prospect unsettles the Turks, some longtime experts say that Turkey’s interest in defeating the Islamic State is ultimately no different than that of the United States and its allies, even if it avoids military action.

“Perhaps Turkey will come to judge that they should participate or overtly support other allies in the airstrikes,” said Francis J. Ricciardone, who recently retired as the American ambassador to Turkey, “but less visible forms of support also can be important.”