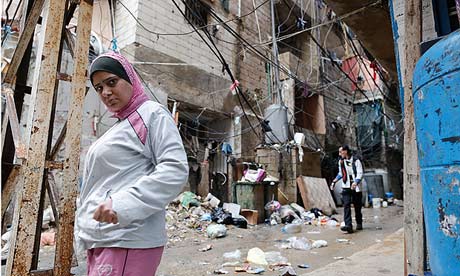 BEIRUT, Lebanon —The Shatila refugee camp on the southern edge of this city has been a wound of war for 66 years.

Today, it is swollen with Syrian exiles, victims of their country’s ongoing civil war, and serves as a frightening reminder of the instability that could linger like poison if Canada and the international community fail to defuse Syria’s crisis.

One square kilometre of some of the most densely populated misery on Earth, Shatila is a maze of alleys, battle-scarred buildings and destitute refugees.

Originally home to about 10,000 Palestinians who were displaced by the creation of Israel in 1948, it has recently seen its population double as Syrians have flooded in seeking shelter.

At the heart of the camp, in a building destroyed by artillery during the 1982 Israeli invasion of Lebanon, a half-dozen Syrian families have taken up residence in drab cement-block apartments built around the core of the bomb-shattered skeleton.

Walid Haiaki, 40, a former ice cream vendor from Daraa, Syria, and his wife and two daughters, Rose Haiaki, 7, and Haled Rama, 4, pay $300 a month for three small rooms in the war-damaged building.

“We were in real danger, when we fled,” Haiaki says of his departure from Syria two years ago.

“There was fighting everywhere and gangs were kidnapping people. Nobody escaped the dangers. Even airplanes used to attack us. We used to feel the whole house shaking and the children were frightened. The army and the rebels were fighting each other and we were just in the middle. It was too dangerous.”

Now, as earns a living as a day labourer on Beirut construction sites, Haiaki worries about his little girls.

“The children know what is going on. They watch and listen. They hear people talking about who has been killed. It becomes part of their daily life.

“Rose is a bit scared,” he says, nodding towards the youngster, who clutches a cushion as she sits on a second-hand couch and listens to her father.

“She misses home. In Syria we had big houses with gardens. We lived in nice places. Here, we are packed into this small apartment that smells and is damp.”

The Lebanese don’t really like Syrians, Haiaki complains. “They remember we controlled Lebanon for 29 years and they resent us. We’re strangers here. But it is the only choice for me.

“It doesn’t look like we will ever be able to go back,” he says morosely. “Things look like they are going to get worse. With fighters coming from different Arab countries, it is all getting very complicated.”

Every fourth person in Lebanon today is a Syrian refugee.

“The numbers are staggering,” says Ninette Kelley, a Canadian who serves as the United Nations High Commissioner for Refugees representative in Lebanon.

“Lebanon is twice the size of Prince Edward Island and would fit quite nicely in the area between Toronto and Ottawa. Yet they have accepted more than a million Syrians. It would be like Canada taking in some 8 million refugees in a span of just 18 months.

“There are over 400,000 refugee students here in Lebanon,” says Kelley, “and last year there were only 350,000 Lebanese children registered in Lebanese schools.”

Lebanon endured its own, 15-year long civil war, which ended in 1990, and is now staggering to absorb the influx of Syrians, who are straining the country’s infrastructure to the breaking point, disturbing its delicate ethnic, religious and political balances and undercutting the economy, driving up prices and rents while slashing wages.

“From the Syrian side, you find well-educated people who are underemployed and forced to take any work they can find, as casual labourers who get little,” says Patricia Mouamar, a spokeswoman for World Vision. “They’ll do anything just to provide for their families. But on the Lebanese side, people are losing their jobs or not receiving the same pay they used to.”

Lebanon refuses to allow the creation of formal refugee camps because it fears they will become permanent parts of the landscape. The country has continued to play the reluctant host to 450,000 Palestinians in 10 refugee camps for the past 66 years, and it has no intention of doing the same with one million Syrians.

As a result, Syrian refugees have been forced to find accommodation wherever they can, occupying abandoned or partially constructed buildings, living in schools, renting farm buildings or fields and setting up tents on wasteland.

“These people are just trying to keep living while the rest of the world ignores them,” says Ahmed, a Syrian field worker with an international charity in Lebanon. “You see it most in the children. They are not children anymore. They are adults. They are talking about responsibilities, how to provide the basic needs for their families. They are thinking about everything they need to simply survive.”

Half the Syrian refugees in Lebanon are children, children who already know the horror of war and whose lives are full of chaos and uncertainty.

“When you see the children, you are looking at the future and it is sad,” says Ahmed. “In a few years, this is all that there will be to their life. They won’t know what else to do. They’ll hate everybody. They will feel they have been manipulated and nobody has helped them. Everybody was lying to them. They will hate everybody and they will justify terrible things.

“These are people who have paid the highest price and, in the end, they will explode and the explosion will be a catastrophe for the whole region.”

Every week, Lebanon receives an additional 10,000 Syrian refugees. “That is the equivalent to the number of refugees who arrive spontaneously in Canada in a year,” says Kelley, who has co-authored a history of Canadian immigration policy and served on the Immigration and Refugee Board of Canada.

Countries like Canada can do more, she insists. “ We are very grateful for the humanitarian support that we have received. We do think that we do need more. Lebanon definitely needs money to help it manage this unprecedented crisis. It’s having a very difficult, destabilizing effect here.”But Canada and other nations could also resettle more refugees, she says, and do more “to relax visa restrictions, to provide for family reunification, to provide education sponsorships and medical evacuations.

“All these areas are very tangible and important signs of burden sharing.”

Fawaz, a Syrian grade school teacher in his late 20s, fled the north central city of Raqqah in January, when the jihadist group Islamic State turned his city into the declared capital of a new Islamic caliphate.

He now shares a tent with a mud floor covered by straw mats with his elderly mother and another family. They are in a squatters camp between a rural road and a Muslim graveyard in the Kfardane area of the Bekaa Valley.

He says some Syrian children display the signs of post-traumatic stress.

“Here, in an agricultural area, there are planes that spray the crops. But when the children see the planes or even hear the noise of it, there is chaos in the whole camp. All of the children are screaming or crying or running. They are hiding, screaming, swearing.

“There are also some quarries in the hills above the valley and when there are explosions there, the children panic. It’s the same when people fire guns at a wedding or a funeral. Whenever they hear an explosion, the children go crazy. They are crying and scared.

“Lots of parents complain that their children are wetting their pants,” he says. “Or in the middle of the night, they start screaming and wake up frightened. There are a lot of those cases.”

When Fawaz first arrived in Lebanon, he found refugees in the informal camps were almost totally dependent on the United Nations and international relief agencies for support. Some people got jobs as labourers on surrounding farms, but the work was sporadic at best.

Most Syrian children are unable to attend school, so Fawaz started talking to families who could help buy supplies and began to give lessons. Then he got a job as a teacher in a Save the Children summer pilot project offering a half-day program for 200 Syrian children at a local Lebanese school.

In July, Canada announced it will contribute $10 million to a UNICEF fund to improve school buildings and teacher training in Lebanon’s schools to help them cope with the Syrian refugee influx.

Canada has already spent $631 million to shore up the UN and countries hosting Syrian refugees and is one of the top donors for humanitarian assistance in the region.

But the Syrian crisis has already moved from being an immediate disaster to a protracted catastrophe.

The 150 different aid agencies working with the UNHCR to care for Syria’s 10 million refugees now worry the world is not doing enough to prevent things from getting worse.

“The Syrian response is considerably underfunded,” says Alexandra Lages, CARE’s deputy country director in Lebanon. “I think everyone faces that situation. It has been three years. It doesn’t attract as much public attention. There are other emergencies. The funding decreases after some time.”

With the Syrian crisis, however, the number of refugees has never stopped growing.

On Aug. 29, Antonio Guterres, the UN High Commissioner for Refugees, said the Syrian crisis “has become the biggest humanitarian emergency of our era,” noting that this year the number of Syrian refugees outside their country climbed by one million to 3 million.

“Almost half of all Syrians have now been forced to abandon their homes and flee for their lives,” he said. “One in every eight Syrians has fled across the border. A further 6.5 million are displaced within Syria. ”

Yet a UN appeal to raise funds for Syrians has reached only 30 per cent of its target. The UNHCR is $2 billion short of its planned operating budget for the crisis and has been forced to cut back on everything from food to blankets.

“Failing to provide enough humanitarian support for Syrian refugees by the end of 2014 could result in dramatic consequences for refugees and the stability of the entire region,” warns Guterres.

“We have a situation of heightened volatility in the region, a spillover of the conflict into Iraq and continued outflows of refugees into neighbouring countries with very complex security and humanitarian issues.”

“There is no hope,” she concludes.

Lages says one of her colleagues recently interviewed a 13-year-old refugee who said he wants to die.

“He is the only breadwinner of the family, because his parents are too sick to work. He goes to work at 4 a.m., works all day and earns something like $40 a month. The only thing he wanted was to die . . . there was nothing to live for.”

When Syrians first fled to Lebanon, they hoped things would change in Syria quickly. After three years there, is not much sign of a solution.

“We have a very ugly dilemma,” says Lages. “You have more refugees and you have less money. Our job now in terms of the refugees is cutting and prioritizing. We are not talking any more about the extremely vulnerable. The super-extremely vulnerable are the only ones who can receive money. This is a dilemma facing all NGOs and the UNHCR.