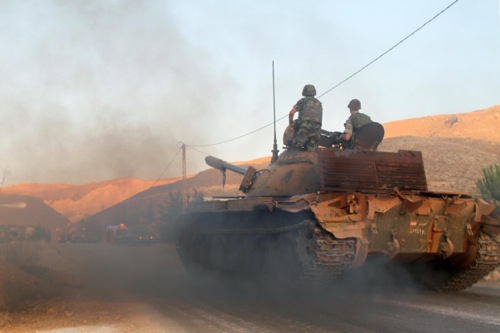 At least one person was killed and two wounded during a search for militants at refugee camps near Lebanon’s border with Syria, the Lebanese army says.

Soldiers patrolling a camp outside the town of Arsal opened fire on the men when they tried to set fire to tents at a neighbouring camp, a statement said.

However, residents and a local official disputed the army’s version of events.

The official told AFP that troops had poured petrol on the tents to set fire to them, and detained hundreds of men.

“They attacked the women and children, and rounded up the men,” he said.

“I was just there, and I saw an old man, around 90 years old, with all his bones broken from the beatings,” he added. “There is no safety for the refugees in Arsal at all.”

An army spokesman dismissed the allegations as “lies”, adding: “Our troops act in accordance with international standards of humanitarian treatment.”

However, the official National News Agency reported that dozens of Lebanese and Syrian citizens had been arrested in the raids.

Many have been accused of being members of al-Qaeda’s affiliate in Syria, the al-Nusra Front, which was involved in clashes last month in and around Arsal that left dozens of militants and soldiers dead.

Several dozen Lebanese soldiers and policemen were captured during the fighting by members of al-Nusra and Islamic State (IS), and at least three have since been killed by the jihadists.

That has caused deep anger and anxiety in Lebanon, which has more than 1.1 million Syrian refugees and only 4 million citizens.