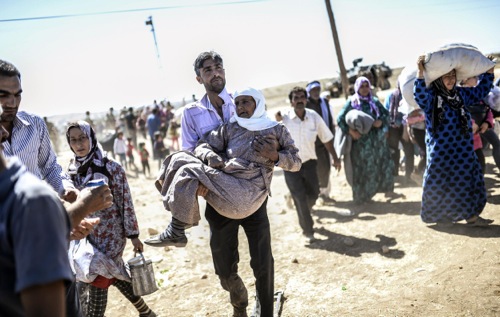 Tens of thousands of Syrian Kurds have crossed into Turkey over the past day, fleeing an advance by ISIS fighters who have seized dozens of villages close to the border, Turkish Deputy Prime Minister Numan Kurtulmus said Saturday. Turkey opened a stretch of the frontier on Friday after Kurdish civilians fled their homes, fearing an imminent attack on the Syrian border town of Ayn al-Arab, known as Kobani in Kurdish. Reuters
Share:

Islamic State militants tightened their noose on a northern Syrian border town on Sunday as the United Nations said the number of Syrian Kurds fleeing into neighbouring Turkey may have topped 100,000 and was likely to go much higher.

Residents fleeing the frontier town of Ayn al-Arab, known in Kurdish as Kobani, and its surrounding villages said the militants were executing people of all ages in the areas they had seized to create a climate of fear and slavish obedience.

Kurdish politicians in Turkey renewed their appeal to young people in the country’s mainly Kurdish southeast to head to Kobani to help their ethnic kin push back Islamic State, which has seized swathes of Iraq and Syria in recent months and proclaimed a caliphate in the heart of the Middle East.

“ISIL (Islamic State) are continuing to advance. Every place they pass through they kill, wound and kidnap people. Many people are missing and we believe they were kidnapped,” Welat Avar, a doctor, told Reuters by telephone from Kobani.

“We now urgently need medicines and equipment for operations. We have many casualties … ISIL killed many people in the villages. They cut off the heads of two people, I saw it with my own eyes,” he said.

A Kurdish politician from Turkey who visited Kobani on Saturday gave a similar account of the Sunni militants’ tactics.

“Rather than a war this is a genocide operation … They are going into the villages and cutting off the heads of one or two people and showing them to the villagers,” Ibrahim Binici, a deputy from Turkey’s pro-Kurdish HDP party, told Reuters.

“It is truly a shameful situation for humanity,” he said, calling for international intervention.

Some Syrian Kurds compared their plight to the Yazidi minority in Iraq, which came under attack from Islamic State earlier this year. Tens of thousands of Yazidis were forced to flee their homeland of Sinjar and other villages.

The United States has carried out airstrikes against Islamic State in Iraq and has said it is prepared to extend them into Syria, but it is not clear when or where this could take place.

U.S. Ambassador to the United Nations Samantha Power said on Sunday that other countries were willing to join Washington in launching air strikes in Syria against Islamic State militants.

“We will not do the air strikes alone,” she told CBS’ “Face the Nation”. “But we’re going to leave it to other nations to announce for themselves what their specific commitments to the coalition are going to be.”

“WHERE IS THE WORLD?”

Among the tens of thousands crossing the border into Turkey on Sunday was Muhammet Abbas, a 40-year-old teacher who wore a blue cap as protection against the blazing sun. He led a group of about 20 people including his wife and six children.

“Everybody is scared … Where is humanity? Where is the world? They are killing us and nobody cares.”

Turkey has said an estimated 70,000 Syrian Kurds have crossed the border since Friday, but the United Nations refugee agency (UNHCR) said that figure may be too conservative.

“I don’t think in the last three and a half years we have seen 100,000 cross in two days. So this is a bit of a measure of how this situation is unfolding and the very deep fear people have about the circumstances inside Syria, and for that matter Iraq,” said Carol Batchelor, the UNHCR representative in Turkey.

“Quite frankly, we don’t know when those numbers will end, we don’t know what the future holds … It could well go again into the hundreds of thousands. We need assistance for core, life-saving support,” Batchelor told Reuters.

Residents in Kobani said Islamic State was within 15 km (9 miles) of Kobani and closing in from the east, west and south.

The town’s strategic location has been blocking the Sunni Muslim insurgents from consolidating their gains in northern Syria. The group tried to take the town in July but was repulsed by local forces backed by Kurdish fighters from Turkey.

Kurds are mostly Sunni Muslims but Islamic State views them as apostates because of their secular ideology. The group brooks no dissent and has persecuted and killed Shi’ite Muslims, Christians and Yazidis as well as moderate Sunni Muslims who reject their hardline version of Islam.

The Syrian Observatory for Human Rights, which monitors Syria’s civil war, said up to 150,000 Kurds had been displaced – internally and externally – since Islamic State launched its latest offensive against Kobani last Tuesday.

It also said that clashes overnight had killed 10 insurgents, bringing the number of Islamic State fighters killed to at least 39. At least 27 Kurdish fighters have died.

Islamic State has seized at least 64 villages around Kobani since Tuesday, using heavy arms and thousands of fighters. It executed at least 11 civilians on Saturday, including at least two boys, the Observatory said.

International cooperation in resisting Islamic State may prove complicated because of Syrian Kurds’ ties to the Kurdistan Workers’ Party (PKK), a group listed as a terrorist organisation by Western states due to the armed separatist campaign it has waged for Kurdish rights in Turkey over several decades.

The PKK called Turkey’s Kurds to arms on Sunday.

“Supporting this heroic resistance is not just a debt of honour of the Kurds but all Middle East people. Just giving support is not enough, the criterion must be taking part in the resistance,” it said in a statement on its website.

“ISIL fascism must drown in the blood it spills … The youth of North Kurdistan (southeast Turkey) must flow in waves to Kobani,” it said.

Highlighting the political complexities for Turkey, its security forces, clutching riot shields, clashed on Sunday with hundreds of Kurdish protesters who had gathered in solidarity with Kobani for a third day on the Turkish side of the barbed wire fence where many of the refugees were crossing.

The security forces repeatedly fired tear gas and water cannon at the Kurdish protesters, some of whom concealed their faces with scarves as they threw stones.

“The PKK is the people, the people are here,” some chanted.

The PKK accuses Turkey of covertly supporting Islamic State as part of a strategy to crush Kurdish militancy, and said Ankara was collaborating in the attack on Kobani.

Ankara has backed Syrian rebel groups fighting Syrian President Bashar al-Assad but strongly denies any suggestion that it has supported Islamic State or other radical Islamist militants, saying they pose a major security threat to Turkey.

Separately on Sunday, Turkey’s military said it had scrambled two fighter jets after a Syrian MI-17 helicopter approached the border near Nusaybin in Mardin province.