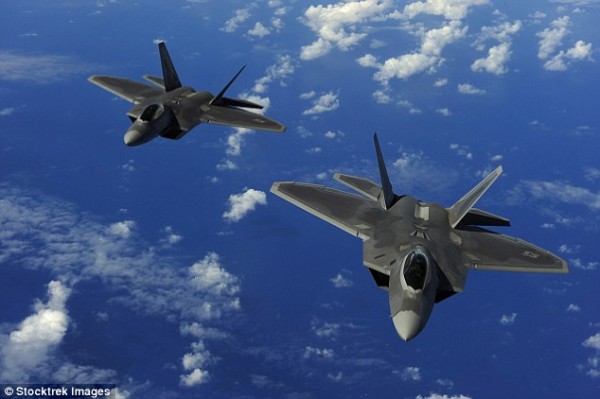 A pair of U.S.-built NORAD F-22 fighter jets fly over a mountainous area of Alaska,
Share:

Lt. Col. Michael Jazdyk, a spokesman for the North American Aerospace Defense Command, or NORAD, said the jets intercepted the planes about 55 nautical miles from the Alaskan coast at about 7 p.m. Pacific time Wednesday.

Tensions are high between the United States and Russia as the two countries are increasingly at odds over Ukraine, where Russian-backed insurgents have been fighting for control of parts of the country.

The Russian planes were identified as two IL-78 refueling tankers, two Mig-31 fighter jets and two Bear long-range bombers. They looped south and returned to their base in Russia after the U.S. jets were scrambled.

At about 1:30 a.m. Thursday, two Canadian CF-18 fighter jets intercepted two of the long-range Russian Bear bombers about 40 nautical miles off the Canadian coastline in the Beaufort Sea.

In both cases, the Russian planes entered the Air Defense Identification Zone, which extends about 200 miles from the coastline. They did not enter sovereign airspace of the United States or Canada.

Jazdyk said the fighter jets were scrambled “basically to let those aircraft know that we see them, and in case of a threat, to let them know we are there to protect our sovereign airspace.”

In the past five years, jets under NORAD’s command have intercepted more than 50 Russian bombers approaching North American airspace.

NORAD is a binational American and Canadian command responsible for air defense in North America.