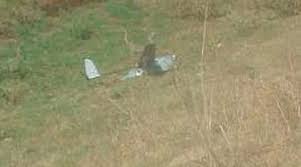 An Israeli drone crashed in the Marjeyoun district of southern near the border with Israel, according to media reports .

The aircraft fell in the town of Sarda , about 15 kilometers from the Blue Line, on Saturday.

The Lebanese armed forces and peacekeepers with the UN Interim Force in Lebanon (UNIFIL) cordoned off the site of the crash, the reports added.

The Israeli drone was later taken to the Marjeyoun barracks after it was confirmed that a malfunction caused it to crash.

According to preliminary investigation, a technical malfunction led to the plane’s fall, according security sources.
The plane crashed at a farm belonging to Mohammad al-Jalil Seet.

Israeli reconnaissance planes violate Lebanon’s airspace on a regular basis in contravention to U.N. Security Council Resolution 1701 which brokered a ceasefire in the 2006 war between Israel and Hezbollah

In 2009, Lebanon filed a complaint with the United Nations, presenting over 7,000 documents pertaining to Israeli violations of Lebanese territory.