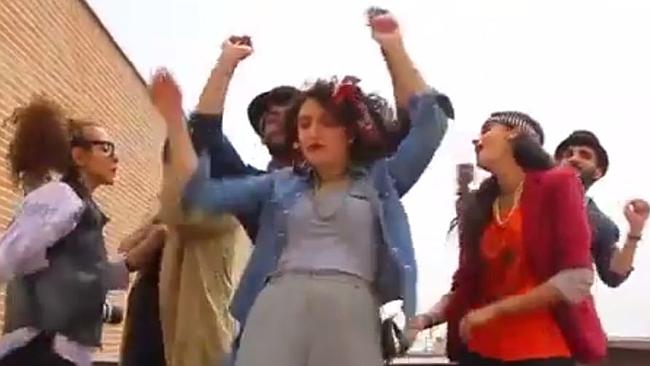 Happy dance … The six Iranians dancing to Pharrell Williamss Happy have been arrested. Source: Supplied
Share:
Six Iranians arrested for appearing in a video singing along to the American pop song “Happy” were given suspended sentences of 91 lashes and six months in prison for obscene behavior, a news website on Thursday quoted their lawyer as saying.

Another defendant who faced ‘heavier charges’ in relation to the video was handed a suspended sentence of one year in jail and 91 lashes by the authorities on Wednesday, the Iran Wire site quoted Farshid Rofugaran as saying.

He was quoted by Iran Wire as saying the verdicts had not been officially communicated to him and so he could not be completely sure about the information he had gathered.

The sentences are suspended for three years, meaning that if any of the seven is found guilty of a similar offense, the punishment is then carried out, he said without elaborating.

Iran Wire is a news and features website run from outside the Islamic Republic.

The defendants, four men and three women, were detained by police in May after six of them were shown lip synching to Pharrell Williams’ hit song “Happy.”

The women appearing in the clip were bare headed in violation of the Islamic dress code enforced after the 1979 Islamic revolution.

The arrests in May drew condemnation from the singer and his fans through social media, as well as indirect criticism from moderate President Hassan Rouhani.

“The way to deal with cultural issues is cultural work, not policemen and (detention) vans and strong-arm tactics,” the president told a gathering of conservative clerics in the religious city of Mashhad earlier this month.