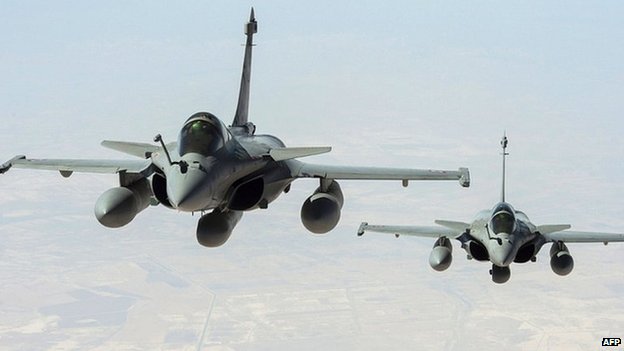 French Rafale fighter jets have been flying reconnaissance missions over Iraq from a base in the United Arab Emirates
Share:

French jets have carried out their first strikes against Islamic State (IS) militants in Iraq, the office of President Francois Hollande says.

A statement said planes had attacked an IS depot in north-east Iraq, and there would be more raids in the coming days.

The US has carried out more than 170 air strikes against the jihadist group in Iraq since mid-August.

IS remains in control of dozens of cities and towns in Iraq and Syria, where it has declared a caliphate.

Friday’s air strike comes a day after President Hollande said he had agreed to an Iraqi request for air support, but it would only target IS in Iraq and not in neighbouring Syria.

He also insisted that he would not send ground troops.

France had already been carrying out reconnaissance flights over Iraq and providing weapons to Kurdish fighters in the north.

Mr Hollande’s office said Rafale planes had carried out the attack and “the objective was hit and completely destroyed”.

“Other operations will follow in the coming days,” the statement added.

It did not give details on the type of material at the depot, nor its exact location.

The BBC’s Hugh Schofield in Paris says it is the first sign of President Hollande’s determination to join military action against IS.

On Monday, France – which opposed the 2003 US-led invasion of Iraq – hosted an international conference on the crisis.

It saw 26 countries pledge their commitment to supporting the new Iraqi government in its fight against IS “by any means necessary, including appropriate military assistance”.

Friday’s air strike took place while US Gen Martin Dempsey, chairman of the Joint Chiefs of Staff, was in France for talks with his counterpart, Gen Pierre de Villiers.

“The French were our very first ally and they are there again for us,” he told reporters in Normandy.

“It just reminds me why these relationships really matter.”

The UK has also been conducting reconnaissance flights in support of the US air campaign.

It has not ruled out air strikes in Iraq or Syria, but has said that targeting IS positions in the latter would be complicated.

On Thursday, the US Senate approved President Barack Obama’s plan to arm and train moderate Syrian rebels to fight IS.

US air strikes are now expected in Syria, but Mr Obama has pledged to not authorise a ground operation in either country.

France is the first of Washington’s allies to strike at IS targets. The mission underscores the perhaps surprising military activism of the socialist French president.

He has committed his country to military interventions in Mali, Central Africa and now Iraq. The French government has made it clear that its air strikes will be restricted to IS targets in Iraq and that there will be no French troops involved in fighting on the ground.

This geographical restriction of French air operations underscores the complexity of President Obama’s stated aim of degrading and disrupting IS activities in Syria too.

That is a mission that US air power may have to take on alone and, despite the fact that Congress is moving to back a “train and equip” programme for the “moderate” Syrian opposition, there are still many questions about how effectively the counter-IS struggle can be extended to Syrian territory as well.