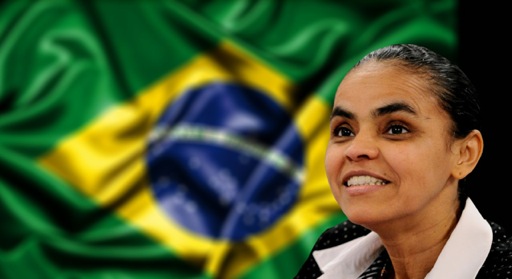 Marina Silva, a front-running presidential candidate who grew up in the Amazon jungle and could become the first black to lead Brazil’s government, said Wednesday that if elected she’ll improve ties with the U.S. and strongly push for human rights in nations like Cuba.

She spoke exclusively to The Associated Pressin her first interview with a foreign media outlet since being thrust into Brazil’s presidential campaign after her Socialist Party’s original candidate died in an Aug. 13 plane crash.

Silva, a former Amazon activist and environment minister who pushed policies that helped Brazil slash the rate at which it was destroying the jungle, has found herself in a dead-heat presidential race with PresidentDilma Rousseff. The incumbent represents the Workers Party, which Silva herself helped found three decades ago.

“Brazil has a great opportunity to become a global leader by leading by example,” Silva said in talking about human rights and environmental protections. “Our values cannot be modified because of ideological or political reasons, or because of pure economic interest.”

Asked whether she would continue Brazil’s strong investment in and political support of regimes like Cuba, Venezuela, China and Iran, Silva said that dialogue is essential with each — but that her personal convictions mean Brazil would be more vocal in pushing human rights.

“The best way to help the Cuban people is by understanding that they can make a transition from the current regime to democracy, and that we don’t need to cut any type of relations,” she said. “It’s enough that we help through the diplomatic process, so that these (human rights) values are pursued.”

Brazil’s relationship with the U.S. has been chilly since revelations more than a year ago that the National Security Agency’s espionage programs targeted Rousseff and other Brazilian officials. The NSA also swept up information on billions of phone calls and emails that traffic through Brazil, an important transit hub for trans-Atlantic fiber-optic cables.

After the revelation, Rousseff became one of the globe’s most outspoken critics of the U.S. spy program and she cancelled her earlier acceptance of President Obama’s invitation for a formal state visit — the first offered to a Brazilian leader in two decades and the first time in memory a foreign leader rejected the honor.

Silva said the U.S. spying was a grave error and it could never be tolerated by her, but she added that it is time to move on.

“Both nations need to improve this situation, to repair the ties of cooperation,” she said. “The Brazilian government has the absolute right to not accept any such interference. But we also cannot simply remain frozen with this problem.

“We will have the will … to rebuild the relationship,” Silva added.

The presidential vote is Oct. 5, but the contest is virtually certain to head to a second-round ballot between Rousseff and Silva three weeks later as neither is expected to win an absolute majority in the first round of eight candidates.

Silva has deep roots in Brazilian politics but has tapped into an anti-establishment mood, a roiling frustration with government embodied by last year’s huge street protests in hundreds of cities demanding top-to-bottom reforms in an inefficient, corrupt political system.

Silva’s appeal cuts across socio-economic and racial barriers, and her life story connects with millions struggling to keep modest advances made as Brazil boomed in the first decade of this century.

As one of 11 children born to an impoverished rubber tapper in the remote Amazon jungle state of Acre, Silva grew up illiterate, walking several miles each day while collecting latex from trees from dawn to dusk. She nearly died as a child and said her family often had virtually nothing to eat.

She was infected with malaria five times and suffered from leishmaniasis, a disease that causes skin ulcers and other ailments. When she was 14, her mother died. At 16, she was sent to the state capital, Rio Branco, for hepatitis treatment — and to finally learn to read and write.

Deeply religious and now an evangelical Christian, Silva at that age wanted to become a nun. She went to study in a convent, and there met priests adhering to liberation theology, a Latin American-inspired movement that advocates for the poor.

It was her political awakening. She joined the Workers Party in its early days and was elected a Rio Branco city council member in 1989. Two years later, she moved into the state legislature before becoming a federal senator in 1995. President Luis Inacio Lula da Silva, who is no relation, made her the environment minister when he took office Jan. 1, 2003.

“If elected, she has such a remarkable personal story that she’d come to the presidency with a lot of legitimacy, tremendous excitement and high expectations,” said Michael Shifter, president of the Washington-based Inter-American Dialogue.

Silva is polling strong with young, educated Brazilians, the demographic that led the demonstrations at their height.

Asked how she would address the frustrations of protesters, Silva said the situation was the reverse — the demonstrations showed that true political reform in Brazil won’t come from the top.

“The question is: What can these movements do to renovate the political parties and to renew political leaders?” she said. “It’s neither the parties nor the leaders who will bring about change. It’s the movements who are changing us.”