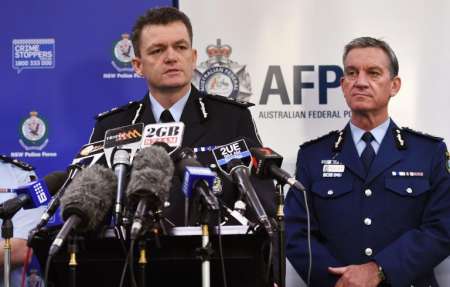 The raids, involving at least 800 heavily-armed officers, took place in Brisbane and Sydney.

Fifteen people were arrested and one person has been charged with conspiracy to prepare a terrorist attack.

Police say the anti-terror operation was the largest in Australian history.

Reports in the Australian media said a plot involved beheading a random member of the public after draping them in an Islamic State flag.

Addressing a press conference, Mr Abbott said “direct exhortations were coming from an Australian who is apparently quite senior in ISIL (Islamic State) to networks of support back in Australia to conduct demonstration killings here in this country”.

“So this is not just suspicion, this is intent and that’s why the police and security agencies decided to act in the way they have.”

They followed investigations into a Sydney-based group “alleged to have the intent to carry out random attacks on individuals” in Australia, the Australia Federal Police said in a statement.
“The police activity today was about preventing this group at the earliest possible opportunity and ensuring their plans did not come to fruition,” Acting AFP Commissioner Andrew Colvin said.

One of the arrested men, Omarjan Azari, 22, later appeared in a Sydney court charged with conspiracy to prepare for a terrorist attack.

Raids in Brisbane were not “directly linked” to the Sydney operation but related to a raid last week on an Islamic centre that led to two men being charged with terrorism offences, Mr Colvin said.

Last week, Australia raised its terror threat level to high amid concerns of the growing number of Australians “working with, connected to or inspired by” Islamist groups.

Officials say dozens of Australians have gone to fight in the Middle East for jihadist groups such as Islamic State and Jabhat al-Nusra (also known as the al-Nusra Front).

At least 60 Australians are believed to be fighting with jihadist groups in Syria and northern Iraq, and 15 Australians have been killed so far in these conflicts, including two suicide bombers.

About 100 more Australians are thought to be actively supporting these groups, police say.

Officials are worried about the impact of both returning fighters and supporters of these groups on domestic security.

It is the first time Australia’s threat level has moved from medium to high – the second-highest rank – since the system was introduced in 2003.

Australia has also recently committed troops to the fight against Islamic State.

Mr Abbott, who has been spending a week in an indigenous area in northern Australia, is heading back south to see off departing troops

The news of an alleged plot to publicly behead a random Australian will shock many people here, including the vast majority of this country’s long-established moderate Muslim community.

Many Muslims are unhappy with what’s going on in Iraq and Syria but would never resort to violence. These raids risk antagonising the broader Islamic community.

But Australia, like many countries including Britain, is worried about the threat from Islamic State, not just abroad but at home. More than a decade on from Australia’s support for the US-led war in Iraq, the country finds itself embroiled in a conflict that is far from over.

Tony Abbott this week announced he is sending 600 troops to the Middle East to assist in the fight against Islamic State. Security forces clearly face a battle at home too.