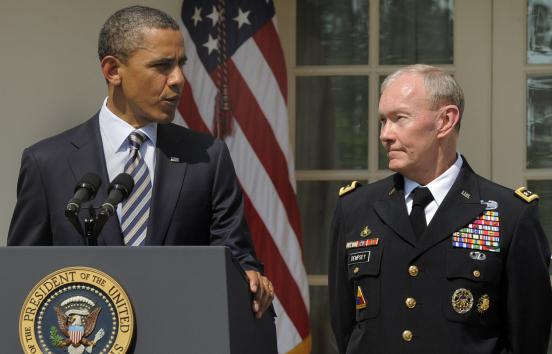 President Barack Obama and Gen. Martin Dempsey, the chairman of the Joint Chiefs of Staff
Share:
A week ago, President Obama stood before the American people and promised that the expanding fight against the Islamic State — a vicious Sunni militant group known as ISIS or ISIL that is terrorizing parts of Iraq and Syria — would not mean a commitment of American ground troops. “As I have said before, these American forces will not have a combat mission,” he said.

On Tuesday, Gen. Martin Dempsey, the chairman of the Joint Chiefs of Staff, had a very different message when he testified before the Senate Armed Services Committee. “If we reach the point where I believe our advisers should accompany Iraqi troops on attacks against specific ISIL targets, I’ll recommend that to the president,” he said, citing a potential attempt to retake the strategic important Iraqi city of Mosul as an example.

There is no way to read this other than as a reversal from the firm commitment Mr. Obama made not to immerse the country in another endless ground war in the Middle East.

Even though General Dempsey’s remarks were conditional, the Obama administration has turned on a dime in record time and opened the door to deeper, more costly American involvement even before the strategy is fully sketched out. And this is happening without Congress ever giving Mr. Obama the authority to wage war.

It’s impossible to believe that General Dempsey was speaking just for himself, though administration officials said his remarks were not cleared by the White House. His initial comments were contained in written testimony, so they would have gone through a review process, at least by Pentagon officials, and scrubbed in advance for errors and misstatements.

He reinforced his position under questioning by members of the Senate committee. American forces in Iraq “are not participating in direct combat. There is no intention for them to do so,” he said, but “I’ve mentioned, though, that if I found that circumstance evolving, I would, of course, change my recommendation.”

So what changed in the last week? Has there been some new intelligence assessment about the Islamic State’s strengths that requires an urgent shift in policy? Has the administration run into difficulty persuading Arab countries and others to join its mission, which cannot succeed without their support? Or was General Dempsey leaving his options open to a ground war, as military leaders like to do, despite what Mr. Obama has promised?

These possibilities are highly disturbing, and they certainly do not provide any basis for considering a move toward a ground war.

White House officials insisted after General Dempsey’s testimony that there is no change in Mr. Obama’s policy. The best proof of that would be for Mr. Obama to reassert his pledge and stick to it.

If there is any lesson to be taken from recent military conflicts, it is how easily the country can slip into an intractable war, with consequences that cannot be fully foreseen, and the fight against the Islamic State is more complicated and multidimensional than most.

The international coalition that Mr. Obama says is crucial to his plan is just being formed. While there have been positive steps toward a new government in Iraq, the positions of defense and interiors ministers remain unfilled as politicians continue to fight for power. Meanwhile, American-led training of forces in Iraq and Syria (the so-called moderate opposition) that are supposed to be central to the military campaign will take months, and congressional approval of the $500 million that Mr. Obama has requested for training and equipping Syrian rebels is far from certain.

The alarming uncertainty that General Dempsey has injected into the still evolving military strategy makes it even more important that Congress carry out its constitutional duty and debate and vote on the new mission in Iraq and Syria.