Obama Ready to Authorize Airstrikes on ISIS in Syria 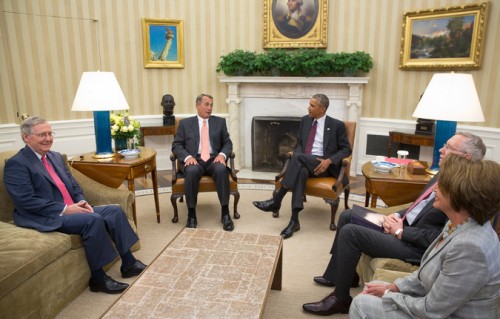 President Obama with congressional leaders at the White House on Tuesday, where he briefed them on his plans for combating the militant group ISIS. Credit Stephen Crowley/The New York Times
Share:
President Obama is prepared to authorize airstrikes in Syria, a senior administration official said on Tuesday, taking the military campaign against the Sunni militant group, the Islamic State in Iraq and Syria, into new and unpredictable terrain.

But Mr. Obama is still wrestling with a series of challenges, including how to train and equip a viable ground force to fight ISIS inside Syria, how to intervene without aiding President Bashar al-Assad, and how to enlist potentially reluctant partners like Turkey and Saudi Arabia.

In a prime-time address on Wednesday evening, Mr. Obama is to explain to Americans his strategy for “degrading and ultimately destroying the terrorist group,” the White House said in a statement. People briefed on the president’s plans described a long-term campaign far more complex than the targeted strikes the United States has used against Al Qaeda in Yemen, Pakistan and elsewhere.

Mr. Obama has resisted military engagement in Syria for more than three years, out of fear early on that arming the rebels who oppose Mr. Assad would fail to alter the balance in the civil war while more direct military intervention could have spillover effects in the volatile region.

When he threatened Syria with a missile strike last year after Mr. Assad’s forces used chemical weapons, implacable opposition in Congress led him to shelve the plan. Now, however, the threat from ISIS has changed both the American political climate and his calculations.

On Tuesday, the president briefed Republican and Democratic leaders of the House and the Senate about his plans. Mr. Obama told them he believed he had the authority needed to order an expanded operation, though he would “welcome action by the Congress that would aid the overall effort,” the White House statement said.

But Congress is divided on the need for a vote on military action before the midterm elections, and both sides appeared to be searching for a way to enlist congressional support without an explicit authorization of force. One way under discussion would be for lawmakers to approve $500 million in funding to train and arm Syrian rebels who would fight ISIS — legislation that has been languishing on Capitol Hill.

Mr. Obama’s speech to the nation, on the eve of the 13th anniversary of the Sept. 11, 2001, terrorist attacks, is the culmination of weeks of anguished internal deliberations, followed by days of intense lobbying of allies by the president — at a NATO meeting in Wales, with Congress, and even over a three-hour dinner Monday night with members of the Democratic and Republican foreign-policy establishment.

The White House has been galvanized by the beheadings of two American journalists, James Foley and Steven J. Sotloff, each by a masked ISIS fighter. The harrowing images, captured on video and circulated around the world, have turned American public opinion in favor of military action against the militants, recent polls show, and appear to have moved a president who had long resisted military engagement in Syria. And the United States has conducted airstrikes against ISIS in Iraq.

But Mr. Obama is facing complications as he works to assemble support at home and a coalition abroad. The Turkish government, for example, has been fearful of an aggressive retaliation against ISIS because of concerns that the group would harm the 49 Turkish citizens it is holding, including its consul general, after ISIS raided the Turkish Consulate in the Iraqi city of Mosul.

On Tuesday, Defense Secretary Chuck Hagel met with Turkish leaders to discuss their contribution to the effort, but emerged with no concrete commitments. A Turkish official expressed concerns that weapons sent to Syrian rebels to fight ISIS could end up in the hands of Kurdish fighters whom Turkey regards as a terrorist group.

The White House is sending Secretary of State John Kerry to Saudi Arabia this week to enlist the Saudis, who have been a vital source of funding to groups opposing the Assad government. The Saudi Arabia, while supportive of the United States, worries that going to war with ISIS could provoke a backlash among Sunni extremists in its own population.

At the dinner on Monday, several participants said, Mr. Obama expressed confidence that a robust coalition would coalesce against ISIS over time. They said he presented a comprehensive plan that included military, diplomatic and ideological components, based on trying to counter the story line that ISIS has propagated in the Arab world.

“The big picture is that this is going to be a very long-term proposition, that American leadership is necessary, and that this can’t turn into a U.S. versus Sunni battle,” said one of the guests, Samuel R. Berger, who was national security adviser to President Bill Clinton. “It has to be us helping the Sunnis battle the Sunni extremists.”

Another participant, Strobe Talbott, a former deputy secretary of state who is the president of the Brookings Institution, said, “He regards ISIS as a new phenomenon that requires not thinking about it as ‘some of them here, some of them there,’ but ‘wherever it is, to go after it.’ “

Jane Harman, the president of the Woodrow Wilson Center, said that while the Assad government was a major topic of discussion, she and other participants told Mr. Obama that he could order military action in Syria without fear of helping Mr. Assad, since ISIS was occupying ungoverned territory that his forces were unlikely to reconquer.

But Ms. Harman, a former Democratic representative from California, said she made a fervent case that Mr. Obama should obtain congressional authorization for any action. Her call was not picked up by many of the Democrats now in Congress.

The House minority leader, Nancy Pelosi of California, told reporters that public attitudes toward military action were far different from a year ago, when Mr. Obama faced deep opposition in Congress to missile strikes against the Assad government for its use of chemical weapons.

Ms. Pelosi suggested that the only vote Congress was likely to take before the Nov. 4 elections would be to fund the military campaign, but Republican leaders are not even promising that.

A stopgap spending bill expected to come to a vote in the House on Thursday will include spending for overseas military operations from Oct. 1 to Dec. 11, but the money will be embedded in the broader bill to keep the government open. And so-called overseas contingency operations will be funded at the same level as spending for such efforts in the current fiscal year, House Republican aides said. Republicans did include all $88 million in new funds to combat Ebola.

The measure would also extend the life of the federal Export-Import Bank through next June over the vociferous opposition of some conservatives, who had mounted a major campaign to kill an agency they denounce as corporate welfare.

“As a practical matter, I don’t really see the time that it would take to really get this out and have a full debate and discuss all these issues,” Representative Howard McKeon, Republican of California and chairman of the House Armed Services Committee, told reporters.

Senator Mitch McConnell of Kentucky, the Republican leader, said he favored congressional approval of military action. But, he added, it is up to the president to present Congress with a clear plan to defeat ISIS before any authorization vote should be taken.

A spokesman for Speaker John A. Boehner said he would support the deployment of American military forces “to help train and play an advisory role for the Iraqi security forces and assist with lethal targeting” of ISIS leaders. But he made no mention of a House vote.

On Wednesday, before the speech, the White House will send a delegation to meet with senators in a classified briefing. Among those going to the Capitol will be the chairman of the Joint Chiefs of Staff, Gen. Martin E. Dempsey; the director of the National Counterterrorism Center, Matthew Olsen; and the deputy national security adviser, Antony J. Blinken.

The brewing confrontation is already proving to be a dividing line between the interventionist wing of the Republican Party and a resurgent isolationism.