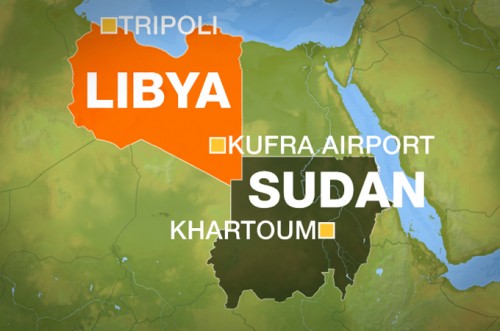 Libya has intercepted a Sudanese military plane loaded with ammunition in its airspace, and declared Sudan’s military attache persona non grata, amid growing accusations Khartoum was supporting Islamist rebels in the country.

Sudan confirmed it had sent a military plane but said it had only carried equipment for a joint Libyan-Sudanese state border force.

“Sudan is interfering by supporting a terrorist group,” a Libyan statement said.

“This work from the Sudanese state violates [the sovereignty] of the State of Libya and interferes with its affairs,” it said, adding that Libya had asked the Sudanese military attache to leave the country.

Ammunition had been found on the plane during an inspection at Kufra airport, near the border to Sudan, it added.

The government said the plane made a refuelling stop in the Kufra, and was bound for the Tripoli-Matiga airport, currently under Islamist rebel control.

Sudan described the incident as a misunderstanding, saying the plane had carried equipment for a joint Sudanese-Libyan border force to tackle smuggling and human trafficking.

“The plane did not carry any material for armed groups in Libya,” Sudan’s army spokesman al-Sawarmi Khalid told the local TV channel Shouruq.

The Sudanese army was not interfering in Libya, he added.

Last month, the US accused the UAE of secretly carrying out air strikes against militias in Tripoli that reportedly killed 13 people.

Libya is in turmoil three years after the ousting of Muammar Gaddafi as armed groups have seized the capital Tripoli and set up an alternative parliament and government.