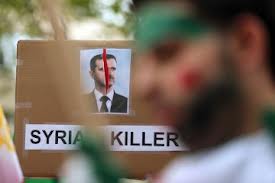 Several Syrian terror suspects who have been detained by Saudi authorities in recent months may have been employed by the regime of Syrian President Bashar Assad.

Forty-eight people — Shabiha — were arrested during a nine-month period for plotting to launch terrorist activities in the Kingdom, Al-Watan reported on Friday. Shabiha are Syrian groups of armed militia in support of the ruling Ba’ath Party.Security forces monitored over the past nine months “what is believed to be a Syrian network with dubious and terrorist activities,” said the paper.

Authorities have detained several suspects in close operations that started since last December, the paper added. It said 48 Syrians were arrested, including 11 who entered the Kingdom as “visitors.”

“The Interior Ministry in its statements did not disclose the charges against them, but the close arrests over the past few months give signals that they were plotting to carry out terrorist acts at the behest of the Assad regime,” the paper said. The number of Syrians detained in Saudi jails is the second largest for foreign detainees after Yemenis, whose number is 189, according to the paper.

The ministry said it had apprehended 88 individuals with suspected links to foreign terror groups, said alarabiya.net

“Security agencies, over a period of several months, monitored all the suspects, particularly those with extremist ideologies,” said a ministry statement carried by the SPA.