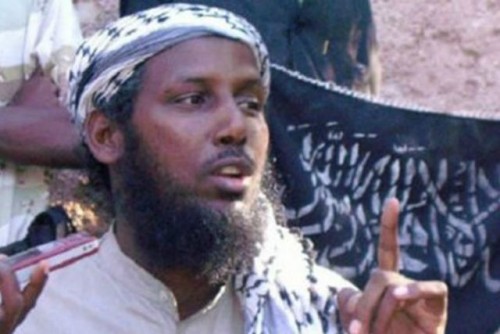 Ahmed Godane
Share:
The Pentagon confirmed on Friday that Ahmed Abdi Godane, a leader of the al Shabaab Islamist group, was killed in a U.S. airstrike in Somalia this week, calling it a “major symbolic and operational loss” for the al Qaeda-affiliated militants.

“We have confirmed that Ahmed Godane, the co-founder of al Shabaab, has been killed,” Rear Admiral John Kirby, the Pentagon’s press secretary, said in a statement.

Since taking charge of al Shabaab in 2008, Godane had restyled the group as a global player in the al Qaeda network, carrying out bombings and suicide attacks in Somalia and elsewhere in the region, including the Sept. 21, 2013, attack on the Westgate shopping mall in Nairobi, Kenya, that killed 67 people.

Godane publicly claimed responsibility for the Westgate attack, saying it was revenge for Kenyan and Western involvement in Somalia and noting its proximity to the anniversary of the Sept. 11, 2001, attacks on the United States.

His death leaves a gap in al Shabaab’s leadership and was seen as posing the biggest challenge to the group’s unity since it emerged as a fighting force eight years ago.

Abdi Ayante, director of the Heritage Institute for Policy Studies in the Somali capital of Mogadishu, said Godane’s death would be “a game changer in many ways for al Shabaab.”

“What is likely to happen is a struggle for power,” he said a day before the Pentagon confirmed Godane’s death. Ayante said fragmentation was also possible in the absence of a leader with Godane’s experience and ruthless approach to dissent.

“He was a strong leader of al Shabaab .. and had basically taken care of rivals pretty effectively,” said Matthew Olsen, director of the U.S. government’s National Counterterrorism Center.

Al Shabaab is a “very fractious” group, and “there are a number of potential candidates” to succeed Godane, Olsen told reporters.

U.S. forces struck Godane’s encampment in south-central Somalia with Hellfire missiles and laser-guided munitions on Monday, but the Pentagon did not confirm his death until Friday, saying it was still assessing the results of the airstrike.

U.S. President Barack Obama, attending a NATO summit in Wales, mentioned the confirmation to reporters, saying: “We released today the fact that we have killed the leader of al Shabaab in Somalia.”

He also noted the United States has worked persistently to degrade the group’s operations.

In a statement, Mohamud said that while an extreme hard core may fight over the leadership of al Shabaab, his government was willing to offer a 45-day amnesty to al Shabaab members who renounce their links to the Islamist group and to al Qaeda.

Somalia’s government, with support from African peacekeepers and Western intelligence, has battled to curb al Shabaab’s influence and drive the group from areas it has continued to control since it was expelled from Mogadishu in 2011.

In the Pentagon’s statement, Kirby said that “removing Godane from the battlefield is a major symbolic and operational loss to al Shabaab.”

A separate statement from White House Press Secretary Josh Earnest said the operation that killed Godane was the result of “years of painstaking work by our intelligence, military and law enforcement professionals.”

The Obama administration would continue to use financial, diplomatic, intelligence and military tools to address the threat posed by al Shabaab, Earnest said.

“For Kenya, this means the very real threat of reprisal attacks by local al Shabaab offshoot groups and the potential for more coordinated violence in the longer term,” Dolan said. Unlike the Westgate mall attacks, which targeted foreigners and wealthy Kenyans, recent violence has hit everyday Kenyans, Dolan said.

The Pentagon did not say from where it launched the attack on Godane, but United States and France have stationed some military operations at a base in Djibouti, to the northwest of Somalia.