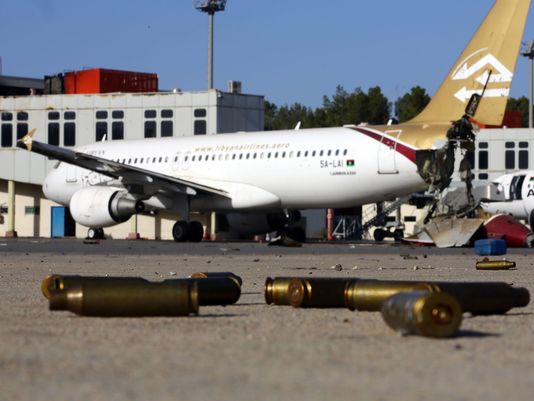 Bullet casings and damaged airplanes sit on the tarmac at Tripoli international airport on Aug. 26 after fighters from the Libyan Dawn coalition captured the airport. (Photo: Mahmud Turkia, AFP/Getty Images)
Share:
Eleven planes missing from a Libya airport are raising fears that militants who stole the jetliners could use them in terror attacks to mark the 9/11 anniversary.

Intelligence agencies have warned the jets could be used in attacks in North Africa, and said one or more of the planes may be used to strike targets on Sept. 11 to mark the anniversary of terrorist attacks on the USA, the Washington Free Beacon reported.

The date also marks the second anniversary of the Libyan terrorist attack on the U.S. diplomatic compound in Benghazi, which killed four Americans including Ambassador Christopher Stevens.

There has been no independent confirmation on the missing jetliners from the U.S. or Libyan government, but images have surfaced online showing militants posing with the jetliners taken when they overran Tripoli airport last month in a fierce battle that left much of the airport and its aircraft damaged.

Al Jazeera television also reported the planes were taken by a militant group, according to multiple media outlets, with Moroccan military expert Abderrahmane Mekkaoui telling the news organization there was “credible intelligence” the group “is plotting to use the planes in attacks on the Maghreb state’ on the 9/11 anniversary,”The Huffington Post reported.

A U.S. official familiar with the reports told the Beacon: “There are a number of commercial airliners in Libya that are missing. We found out on September 11 what can happen with hijacked planes.”

The developments come as an Islamist militia seized a U.S. Embassy residence in Tripoli over the weekend, posting video online of men playing in a pool at the compound. In late July, U.S. diplomats evacuated the compound and the Capitol to neighboring Tunisia under a U.S. military escort as fighting between rival militias intensified and thousands fled.

In the past four months, a renegade general has battled Islamic militants in the eastern city of Benghazi — cradle of the 2011 uprising that toppled Moammar Gadhafi — as powerful regional militias have fought for control of the Tripoli airport. Islamist-allied militias have seized virtually all of the capital.

Meanwhile, 150,000 people have fled the country, and another 100,000 have been internally displaced, according to a U.N. report released Thursday.