Venezuela has fallen from oil power to oil importer 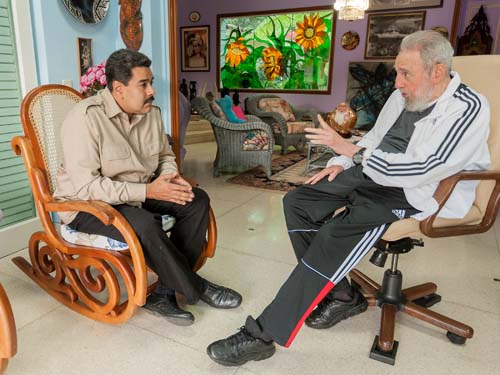 Venezuela’s populist government is well known for its disastrous economic management, but I would have never imagined that it would lead Venezuela, which has the world’s largest oil reserves, to start importing oil.

As weird as it seems, President Nicolás Maduro’s government plans to start importing crude oil for the first time in order to blend it with Venezuela’s own crude and keep the country’s overall production from falling further, the Reuters news agency recently reported, citing an internal document from Venezuela’s state-owned PDVSA oil company.

It turns out that Venezuela’s own production of light crudes has plummeted since the late President Hugo Chávez took office in 1999, and the country desperately needs light crudes to blend with its Orinoco Basin extra-heavy crude oils. Without such a blend, the Orinoco Basin’s extra-heavy crude is too dense to be transported through pipelines to Venezuelan ports and exported abroad.

Venezuela’s oil production, which accounts for 95 percent of the country’s export earnings, should be used in world classrooms as a textbook case of what happens when a populist government starts distributing a country’s wealth in cash subsidies without investing in maintenance and innovation. Much like what happened with Cuba’s once flourishing sugar industry, Venezuela’s Chávez-inspired populism has destroyed the goose that laid the golden eggs.

Curious to find out how a country with the world’s largest oil reserves can end up importing oil, I called Evanan Romero, a former Venezuelan vice minister of energy and former PDVSA director, who now works as an oil industry consultant.

Romero told me that the Venezuelan government desperately needs to speed up oil exports to get cash, because the government is bankrupt. Inflation has surpassed an annual rate of 60 percent, and Venezuela will be Latin America’s country with the lowest economic growth this year, according to World Bank estimates.

But to speed up oil exports, Venezuela needs to blend its heavy crudes with lighter imported crudes, because Venezuela is no longer producing enough light crudes of its own. Production of light crudes has fallen because of lack of investments, abandonment of exploration of light crude areas, and the nationalization of companies that used to help produce light crudes.

Venezuela has asked foreign companies that operate in the Orinoco Basin to invest in “upgrading” facilities that help make heavy crude exportable, but the companies did not want to take that risk because they fear expropriations or because they don’t think it’s a good investment as long as they are only allowed a minority ownership under government rules.

So while the government has already been buying refined products to blend with its heavy crudes, it will now be forced to import light crudes from Algeria, according to the PDVSA document cited by Reuters.

Why can’t Maduro offer a better deal – such as 50-50 ownership – to foreign oil companies, to encourage them to build upgrading facilities? I asked Romero.

My opinion: What makes the news about Venezuela’s plans to import crude even more astounding is the fact that PDVSA used to be a world model of a well-managed state-run oil monopoly. I remember that in the early 1990s, when much of Latin America had pro free-market governments that wanted to privatize everything, I wrote an article citing PDVSA as a case of a highly efficient state-owned company that defied the conventional wisdom of the time.

What’s even more amazing, Chávez and his successor, Maduro, have destroyed the country’s oil industry despite the fact that they have benefited from the greatest oil price bonanza in recent history.

World oil prices have risen from $9 a barrel, when Chávez took office in 1999, to about $100 a barrel today. And yet Chávez and Maduro have managed to destroy Venezuela’s oil industry, and the country is about to start importing crude to keep its exports from falling further.