U.S. will pursue Islamic State to the gates of Hell, warns Biden 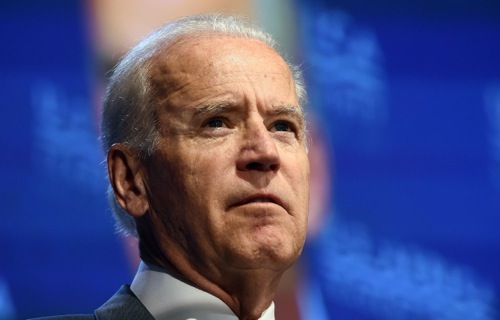 BidenU.S. Vice President Biden used the opening remarks of an economics speech in New Hampshire on Wednesday to vow retaliation for the execution of two American journalists in recent weeks by the militant group Islamic State, who he called “barbarians.”

The comments, the strongest yet from the Obama administration in light of the killings of  journalists James Foley and Steven Sotloff, were met with resounding applause as Biden declared that the American people would respond to the killings much like they did following the Sept. 11, 2001, attacks and the Boston Marathon bombings.

“The American people are so much stronger, so much more resolved than any enemy can fully understand,” Biden said, speaking at the Portsmouth Naval Shipyard. “We don’t forget. We take care of those who are grieving, and when that’s finished, they should know we will follow them to the gates of hell until they are brought to justice, because hell is where they will reside.”

Biden’s remarks came as he, flanked by Democratic members of Congress, delivered a populist speech about the importance of the middle class, which he called the backbone of the U.S. economy.

Biden’s appearance is the latest of several in which he has appeared in states that hold early presidential primaries. The vice president, who has sought the presidency twice before, is widely believed to be pondering a presidential bid in 2016.

Republicans in New Hampshire criticized the visit, noting that Sen. Kelly Ayotte, a prominent member of the Republican caucus, was not made aware of the appearance until after her schedule for the day was already set.

“By only inviting national Democrats to today’s event, the Vice President has injected politics where national security and economic issues should have instead been the focus,” RNC spokesman Michael Short said in a statement. “It’s clear the Vice President is more interested in buoying his presidential ambitions and the reelection prospects of vulnerable Democrats which are all being dragged down by their lockstep support for President Obama and his unpopular agenda.”