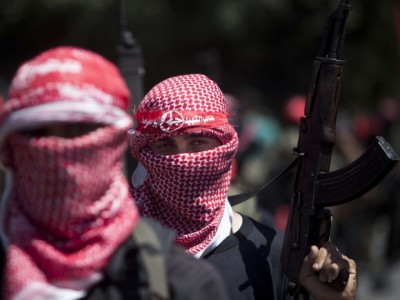 A masked Palestinian militant of the Popular Front for the Liberation of Palestine (PFLP), holds-up his rifle on September 2, 2014 in Gaza city during a rally to celebrate a week after the Egypt-mediated ceasefire between Israel and Hamas. Israel announced on September 1, 2014 it will expropriate 400 hectares (988 acres) of Palestinian land in the occupied West Bank, angering the Palestinians and alarming Israeli peace campaigners. AFP PHOTO/MAHMUD HAMSMAHMUD HAMS/AFP/Getty Images
Share:

Palestinian President Mahmoud Abbas will present a statehood blueprint calling for nine months of peace negotiations with Israel, to be followed by an Israeli withdrawal from the West Bank within three years, Abbas adviser Mahmoud al-Habash has told Jordan’s Al-Ghad newspaper.

The resumption of talks would be contingent on an Israeli freeze on construction in the West Bank and east Jerusalem, the newspaper said Tuesday.

Israeli rejection of the proposal would trigger unilateral Palestinian measures, such as moves to press war crimes charges against Israel, according to the newspaper report. Israeli government spokesman Mark Regev had no comment on the Abbas plan Wednesday.

Israel’s 50-day war with Palestinian militants in Gaza was a “game changer” that persuaded the Palestinian president, Mahmoud Abbas, to join the International Criminal Court, even if that meant defying the United States, a senior Palestinian leader said Tuesday.

“Because enough is enough, and what has the U.S. done for us?” Hanan Ashrawi, a member of the executive committee of his Palestine Liberation Organization, said in an interview with The New York Times during a visit to the U.N.

Ashrawi’s visit was part of a new strategy by Abbas to put international pressure on Israel and to lift his government’s standing among Palestinians in the aftermath of the Gaza war. That strategy involves bringing a Security Council resolution this month that would demand an end to Israeli occupation within three years – a bid that Ashrawi said the U.S. was likely to block – as well as acceding to the treaty that created the International Criminal Court.

Ever since Palestine won upgraded status at the U.N. in late 2012, against Israeli and U.S. opposition, its government has threatened to join the international court as a way to prosecute Israeli actions in the occupied territories.

But Abbas deferred a decision, Ashrawi said, in order to give U.S.-led diplomacy a chance to succeed and to convince other Palestinian political factions, including the militants, that they would have more to gain than lose from an international war crimes tribunal. Joining the court means subjecting Palestinian factions, including Hamas, to its jurisdiction.

Abbas, Ashrawi said, “wanted to ensure that all factions are OK with it.” She added, “He got finally the acceptance of all factions.”

The prospect of the Palestinians joining the court has caused deep concern in Israel and the U.S. because it is one of the only ways that the tribunal can bring war crimes charges against Israelis. The court has jurisdiction only over member countries, or those referred by the Security Council; the U.S. would be highly unlikely to allow such a referral of Israel.

Abbas will seek Arab League support for his plan at a meeting of foreign ministers in Cairo on Sept. 7. Negotiations would begin with border talks, then proceed to other issues including the status of Jerusalem and the fate of Palestinian refugees, Al-Ghad said.

The Palestinians seek to establish a state in the West Bank, Gaza and east Jerusalem. Israel evacuated Gaza in 2005 after a 38-year occupation. The last round of peacemaking broke down in April after Israel didn’t go ahead with a promised release of Palestinian prisoners and Abbas reconciled with Gaza’s Hamas rulers, ending a seven-year rift.

A new poll shows Hamas’s popularity surging in the wake of the Gaza fighting, which halted with an Aug. 26 truce. If elections were held today, 46 percent would vote for Hamas and 31 percent for Abbas’s Fatah party, according to the poll by the Palestinian Center for Policy and Survey Research in Ramallah, West Bank. A poll two months ago showed 32 percent support for Hamas and 40 percent backing for Fatah.

Hamas would sweep presidential elections, too, the poll showed, with Hamas leader Ismail Haniyeh defeating Abbas 61 percent to 32 percent, the poll showed. In the earlier poll, Abbas received 53 percent of the vote and Haniyeh, 41 percent.

The poll surveyed 1,270 Palestinians between Aug. 26 and Aug. 30 and had a margin of error of 3 percentage points.