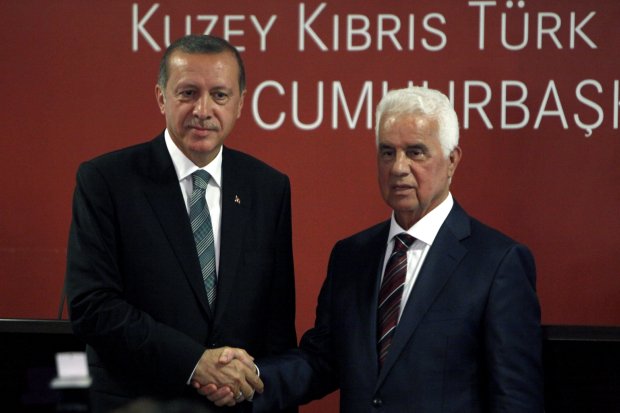 Turkey’s new President Recep Tayyip Erdogan, left, and Turkish Cypriot leader Dervis Eroglu shake hands after a press conference and their meeting in the breakaway Turkish Cypriot north of ethnically divided Cyprus on Monday, Sept. 1, 2014. This is Erdogan’s first visit abroad since his election last month. Cyprus was divided in 1974 when Turkey invaded after a coup by supporters of union with Greece. (AP Photo/Petros Karadjias)
Share:

Turkish President Recep Tayyip Erdogan on Monday visited breakaway northern Cyprus and pressed for a two-state solution on the divided island, on his first trip abroad since his inauguration.

Erdogan flew in on Turkey’s new presidential plane, an Airbus delivered last week that has already been painted in the national colours and dubbed by the press as his “Air Force One”.

He held talks with Dervis Eroglu, leader of the Turkish Republic of Northern Cyprus, which is recognised only by Turkey.

The internationally recognised government in Nicosia condemned the visit as “illegal”.

Visiting the breakaway TRNC is a traditional first point of call for a new Turkish president.

Erdogan reaffirmed his support for the TRNC and said the only way forward was a two-state solution of two equal entities.

“It is our common desire to reach a permanent and fair agreement,” Erdogan said.

“The TRNC is doing whatever necessary to work on a new partnership based on a two-state solution and political equality.

“It is not possible for us to reach any agreement that is not based on a two-state solution,” he said.

“Greece and the Greek Cypriots should demonstrate the same goodwill.”

However, spokesman Nikos Christodoulides said the government considered as unacceptable Ankara’s “frequent call for the involvement of Greece in the dialogue in an effort to equate the responsibilities for the ongoing occupation in Cyprus for which Turkey is solely responsible”.

“No one should test our patience and waste our time. This window of opportunity cannot remain open forever,” he added.

Erdogan said he would discuss Cyprus at this week’s NATO summit and at the opening of the UN General Assembly later in the month.

Cyprus has been divided for 40 years between the TRNC and the internationally recognised Greek Cypriot south, which advocates reunification.

Turkish troops invaded and occupied its northern third in 1974 in response to an Athens-engineered coup aimed at uniting it with Greece.

Eroglu and Cyprus President Nicos Anastasiades, the Greek Cypriot leader, relaunched peace talks in February but without any breakthrough.

Erdogan is expected to visit Azerbaijan on Tuesday before heading later in the week to attend the NATO summit in Wales.

Prime minister for over a decade, Erdogan took office as president on Thursday after winning Turkey’s first ever direct presidential election on August 10.